Alphonse Mucha was a Czech Art Nouveau painter and decorative artist. He produced many paintings, illustrations, advertisements, postcards, and designs.

His most famous works are the posters he made for Sarah Bernhardt’s theatre performances in Paris. He was also known as “the man who invented the poster”. 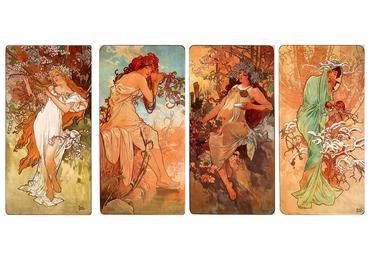 “Four Seasons” is Alphonse Mucha’s masterpiece. The seasons change alternately throughout the year, and romantic artists choose graceful girls to convey the beauty of the four seasons.

In “Four Seasons”, Alphonse Mucha still maintains the combination of girly and nature. From the left are carnations, roses, lilies, and irises. According to different characteristics, different seasons of flowers and plants are selected as foils, with bright and transparent tones.

On the basis of the distinctness of the four seasons, there are more tender and charming, which seems to have a sense of breathing. The four kinds of flowers are transformed into graceful goddesses with different attitudes in Alphonse Mucha’s paintings. 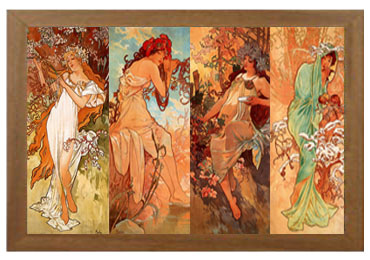 Alphonse Mucha uses a large number of natural elements such as plants and flowers in his paintings to reflect the harmonious relationship between man and nature. Various lines are as agile as water in his paintings.

The world regards Alphonse Mucha as a well-deserved “Master of New Art”. 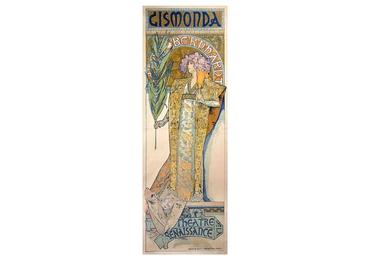 “Gismunda” was created in 1894. In Paris at the time, Sarah was regarded as “the most famous woman in France after Joan of Arc” and was even known as “the Sarah of God”.

Rhythmic lines, tender, and radiant beauties, and delicate flowers and plants, this artistic expression of ideal beauty makes Mucha the spokesperson who can best embody the style and spirit of Art Nouveau.

Unlike the banners and posters that were full of streets at that time, Bernhardt wore floor-standing robes full of intricate decorative patterns, which were noble and gorgeous. Standing slightly sideways, just highlighting the erect nose and plump lips, looking at the palm leaf in his hand, thoughtfully. 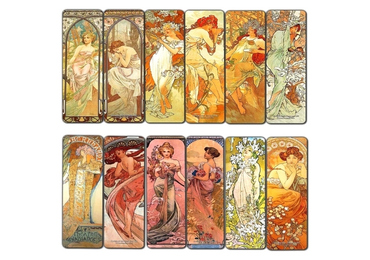 Alphonse Mucha can be said to have become popular with this. For a while, he became the darling of the “new art” era. At that time, this poster was posted on the streets and alleys, and many people even tore it off for collection.

Mucha introduced the Byzantine effect to the Gismonda poster, with border decoration inspired by mosaic works, adding a solemn atmosphere to the commercial poster. 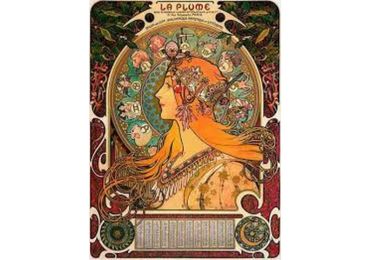 A turning point in Alphonse Mucha’s artistic creation came with the success of his new lithographic poster for actress Sarah Bernhardt.

His rise to fame was also recognized by the printer Champenois, who signed his first contract with him in 1896. The main job was to ask Mucha to create a lithographic work called Zodiac. This is a company internal calendar.

Looking at the lithography of the Zodiac, the most conspicuous in the picture is a woman with a noble temperament and wearing luxury jewelry. The woman’s head and the female figure are common themes in Alphonse Mucha’s work. 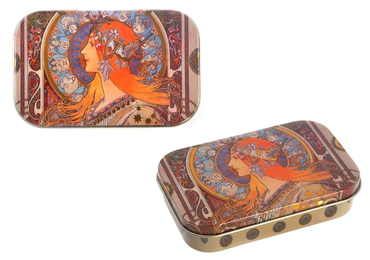 Behind the woman’s head is an almost halo-like effect showing the zodiac signs. This symbolizes the astrological calendar. The lithographs are full colour and enhanced with hand gold leaf.

The rest of the piece is a design that mixes elegant lines, flowers and plants, and highly decorative borders.

The set was later purchased by Léon Deschamps, editor-in-chief of La Plume, and published as the magazine’s 1897 calendar. The Zodiac has become one of Mucha’s most popular designs. 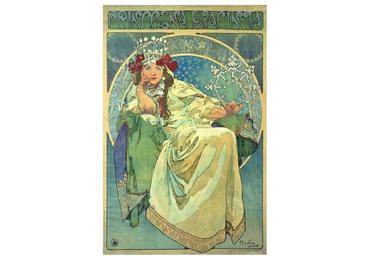 “Princess Hyacinth” was created in 1911. The blacksmith dreamed that his daughter was abducted by a wizard after she became a princess hyacinth. In the works of “Musha Style”, women and plants are the eternal protagonists, which are very classical and romantic. 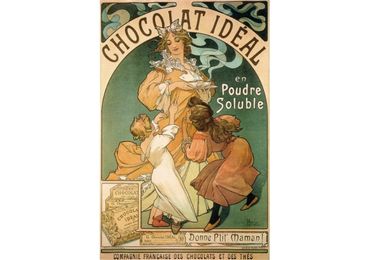 Known for his Art Nouveau paintings of the second half of the 19th and the first half of the 20th century, Czech painter Alphonse Mucha dabbled in a variety of art forms, including painting, postcards, advertising, and illustration. 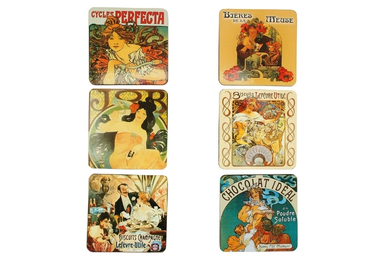 Since the eighteenth century in Europe, cocoa has been introduced to France from Austria. At this time, the Pelletier pharmacist, who is credited as the inventor of quinine, also began to sell chocolate.

Descendants of this pharmacist founded Compagnie Française des Chocolats et des Thés in 1853. They inherited the procedure they invented to be able to sell chocolate powder under the brand name Chocolat Ideal.

The painting shows a woman standing under an arch that reads “Chocolate Ideal” with three steaming cups in her hands, while two children pull her skirt, eager to drink cocoa. The packaging of the product features a bottom-down vignette. 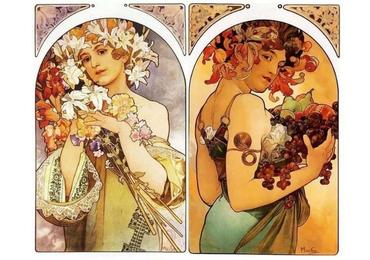 In the works of “Fruit” and “Flowers”, Alphonse Mucha is used to express his cognition of beauty by using rhythmic lines and artistic techniques of the ideal beauty of beauties and flowers. It can also be imagined that Alphonse Mucha must like to grow flowers very much. This kind of natural beauty, with a little modification, is a moving lining.

His studio is always scented with flowers. In addition to the edification of beauty, there is also the excitement of smell. The whole painting can not help being beautiful, so seeing his paintings is a double feeling of vision and smell, a kind of blurring of boundaries by beauty and synesthesia experience. 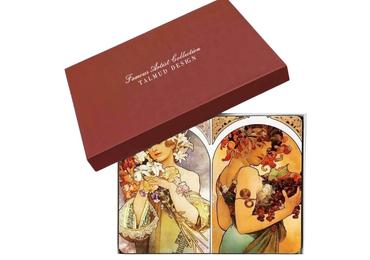 In addition to bringing him a continuous source of creative themes, of course, the sense of smell is used to deepen the sense of beauty and blend it into the vibrant colors, allowing the audience to appreciate it as if they are also in the aromatherapy world wrapped in nature. 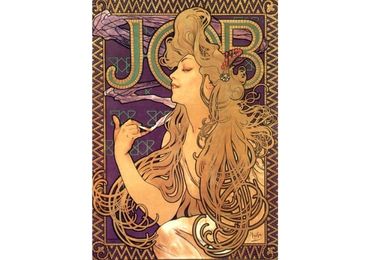 The work, titled “Job,” is a poster made by Alphonse Mucha for a cigarette company in 1896. “JOB” is a trademark of the Joseph Bardou Company, manufacturer of cigarette paper.

This is probably one of Alphonse Mucha’s most famous advertising posters, which was subsequently published in various formats for the international market. This poster establishes the iconic image of “The Mucha Woman” with exaggerated thick curls. 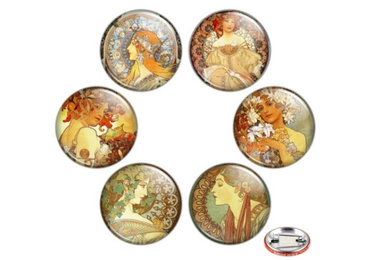 In this poster, Mucha combines the stylish female figure with the Job monogram as the entire backdrop of the piece. The woman holds a lit cigarette and throws her head back sensually as the rising smoke, company logo and her hair intertwine.

In 1898 Mucha made another design for the Job, called “great Job”. 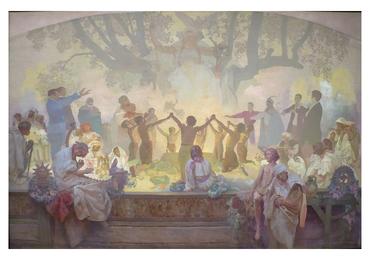 There are 20 large-scale works in the “Slav Epic” series, and Mucha also used his decorative techniques in this series of works.

The content depicts important events in the history of the Slavic nation. The pattern of this work crosses national borders, including later Czechoslovakia, Yugoslavia, Croatia, Bosnia, Soviet Russia, and even small countries with disputes.

Mucha took eighteen years to complete the series. Mucha once interpreted himself like this: “Art creation is to build a bridge of history, so that the past and the past are better connected, in order to make human beings unite and progress in such emotions.” 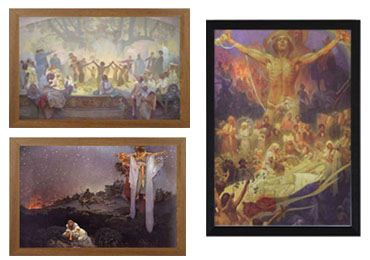 “Slav Epic” is like a storybook depicting the process of Slavic history, telling those indelible moments through subtle and vivid pictures. Whether it is the opening work “Slavs of the Birthplace” full of patriotism, or “Saint Athos” expressing the cultural roots of the Slavic people, or the concluding celebration chapter “The Slavs of the Slavs” that combines the first nineteen works model”.

While interpreting the paintings of the “Slav Epic”, another Mucha appeared in front of the public. He broke away from the shackles of the commodity society, turned to re-examine the future artistic life, and established a new creative space to describe the great and strong Slavic peoples in his heart. 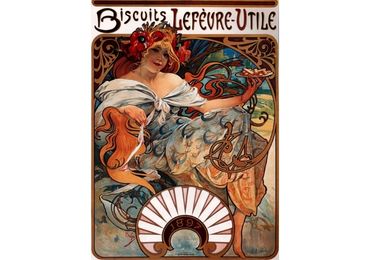 From 1888 to 1913, Czech artist Alphonse Mucha (1860-1939) designed posters in Paris, printed by Champénois. Their commissioning relationship underscores the critical role of printers in art posters.

Champénois has pioneered collaborations with Mucha in the commercialization of art and has attracted prestigious clients such as Job and Bières de la Meuse. Later, Champénois also licensed Mucha’s art designs to other clients, and most of the printed posters were used for collections. 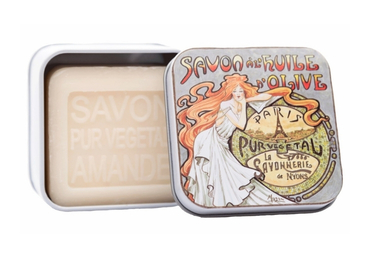 This large-format poster by Bières de la Meuse, created in 1897, depicts a woman with a wreath of poppies, wheat, and hops in her hair, holding a pint of beer.

She has Slavic features, reminiscent of the summer in Mucha’s Four Seasons series the previous year. The bottom of the poster contains two images by another artist: a picture of the Goddess of the Meuse and an aerial view of the brewery.

The design of Alphonse Mucha has great commercial potential, and also created a precedent for the application of art in the commercial field. Many famous European souvenir wholesalers are inspired by Mucha’s work, for example, France, Austria, Germany, Netherland, etc. 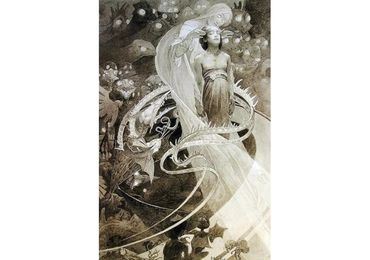 Mucha’s most famous works are “Le Pete” and “Slavic Epic”, which he himself considered his masterpieces. But the former is controversial.

Published in December 1899, Le Pater is an illustrated edition of Mucha’s “Lord’s Prayer”, the artist’s wish to provide mankind with a path to the divine ideal, the highest state of the spiritual world, through Christian prayer. 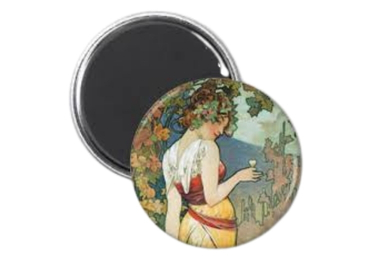 The set was originally published in 510 volumes, and Mucha described his interpretation of the Lord’s Prayer as “rich” and “Something I’ve devoted myself to.” Now, 120 years later, Le Pater is hailed as his rarest and most powerful creation.

Le Pater’s entire work is imbued with Freemasonry philosophy and is Mucha’s first expression as an artist and philosopher. In 1900 Mucha exhibited the book and preparatory drawings at the Paris International Exhibition. 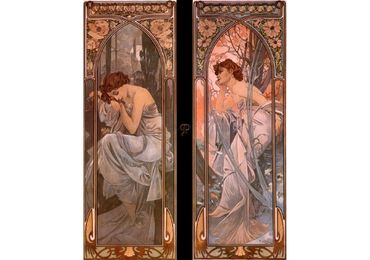 Alphonse Mucha was born in Moravia, present-day Czech Republic, in 1860.

The artist later became an overnight success in Paris for his commercial posters for the theatrical productions of Sarah Bernhardt, the most famous actress in Paris at the time. 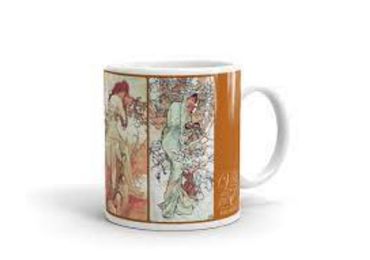 After continuous practice, Mucha has also formed his own unique artistic style, called “le style Mucha”, which has become synonymous with the current Art Nouveau style.

This poster, titled “Evening Reverie”, is one of Mucha’s traditional styles, created in 1898. This is his way of expressing the mood of dreaming at sunset through his artwork. 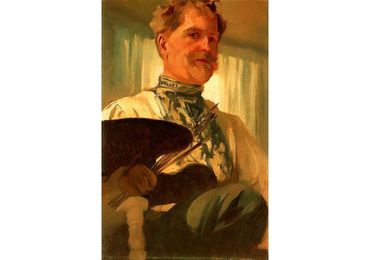 Alphonse Mucha created many self-portraits in his lifetime, like other artists. This self-portrait was made in 1907.

When the TALMUD team studied the artist’s artwork, they found that in many of his self-portraits, he was wearing a shirt embroidered with rubashka, said to have been an original gift from his friend David Widhopff.

For Mucha and Widhopff, rubashka symbolizes Slavic unity, which is why he created a series of Slavic-themed works. 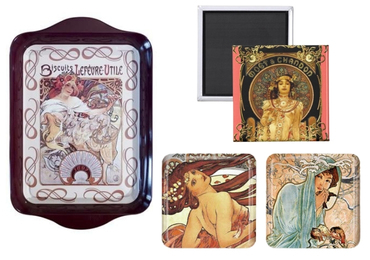 Thanks to their creative talent and innovative spirit, inspiring the world to continue to progress, especially on the spiritual level.

If you are an art museum, gallery, agency, please contact the TALMUD team HERE. In addition to high-quality art souvenirs, we can also provide you with business consulting in the souvenir industry.