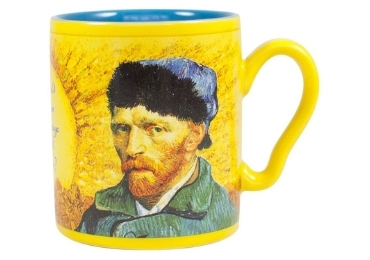 Is Vincent Van Gogh a weird lunatic or a misunderstood genius? A thousand people have a thousand Van Gogh in their hearts.

Although Vincent Van Gogh left behind an art collection that he could not imagine would be so famous, it was invaluable. But he spent his whole life impoverished.

Many other painters and artists in history have made fortunes throughout their lives, but Van Gogh only sold one painting.

His life was defined by depression, poverty, and mental illness, which eventually led to his suicide in 1890.

Despite his many difficulties and problems, he created more than 2,100 works of art in his lifetime, of which about 860 were oil paintings.

The TALMUD team is not qualified to comment on which is the best. The wealth that Van Gogh left to the world is far from being measured by money. We are just sharing some research results and insights with you.

And attach some Van Gogh custom souvenirs that we produced, which counts as admiration for him! 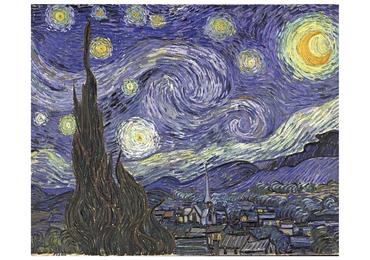 “Starry Night” was painted in Saint-Rémy, France in June 1889. The main color blue in the oil painting represents an unhappy and gloomy feeling. The thick strokes represent sadness.

The scene in the painting is a scene looking out the window. The tree in the painting is cypress, but it is painted like a black tongue of fire, straight up to the clouds, which makes people feel uneasy. The texture of the sky resembles a spiral galaxy with numerous star points, while the moon appears in the form of a dimly yellow lunar eclipse. 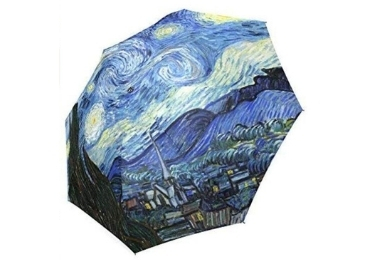 In the whole painting, the village at the bottom is painted with straight, thick, and short lines, showing a kind of tranquility; but it has a strong contrast with the rough and curved lines on the upper part, which is reflected in this highly exaggerated deformation and strong visual contrast. Out of the painter’s restless emotions and psychedelic world of images.

It is now in the Metropolitan Museum of Modern Art, New York.

2, Cypress Trees In The Wheat Field 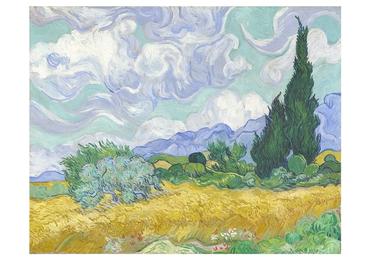 Cypress Trees In The Wheat Field

The towering cypress trees surrounding the shelter of Saint-Rémy in the painting “Cypress in the Rye” are as important as sunflowers to Van Gogh, in Arles.

With its unique bold influence, the artist rendered the trees and the surrounding landscape with dynamic swirls. The heavy paint layer adds texture to the asymmetrically woven premium canvas that Van Gogh ordered from Paris and was used in most of his later works. 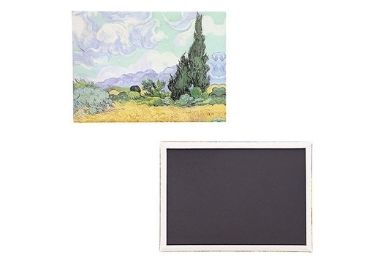 Van Gogh believed that “the wheat field and the cypress” was one of his best summer landscapes.

It is now in the Metropolitan Museum of Art, New York.

3, The Red Vineyards Of Arles 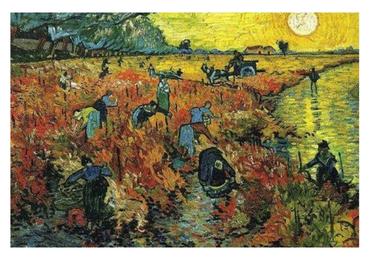 The Red Vineyards Of Arles

“The Red Vineyards of Arles” was painted in Arles, France in early November 1888.

“The Red Vineyards of Arles” captures the bright colors and gleaming light washed out in southern France in early November. Artist Paul Gauguin may have inspired bright colors. 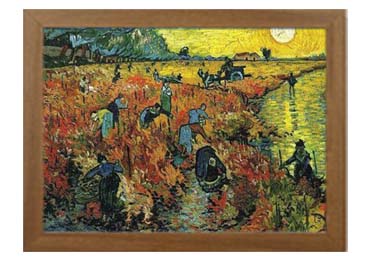 The Red Vineyards of Arles Poster

This work is the work of the expressive post-impressionist painter Van Gogh. This painting has strong brushstrokes.

It is now in the Pushkin Museum of Fine Arts, Moscow.

4, Crows In The Wheat Field 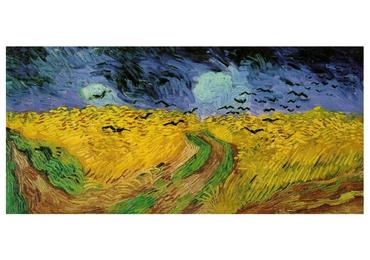 Crows In The Wheat Field

“The Rye and the Crow” is the latest work in the last two months of his life and is sometimes described as a suicide note.

“I tried to express my sadness, extremely lonely,” he told his brother. During this period, Van Gogh may have been quoting several very similar paintings completed in Orpheus, France.

The colors and images in “The Rye and the Crow” suggest powerful symbols. Some scholars call the fleeing crow a harbinger of death. But are these birds flying towards the painter (implying doom) or far away (implying redemption)? 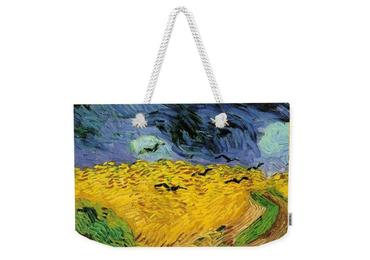 Crows In The Wheat Field Bag

Historians debated whether the artist planned to commit suicide. Just like “the wheat field and the crow”, Van Gogh’s mysterious death can be explained in many ways.

The painting is now in the Van Gogh Museum. 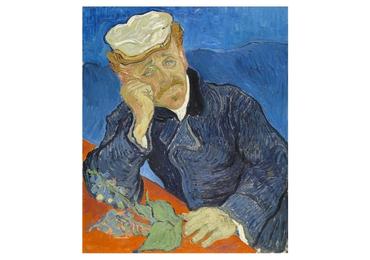 “Portrait of Dr. Gashaw” is after leaving the asylum, Van Gogh received homeopathy and psychiatric care from Dr. Gachet. He is an aspiring artist who seems to be troubled by his own psychological demons.

Van Gogh painted two similar portraits of his doctor. In both cases, a frustrated Dr. Gachet sat with his left hand on a branch of foxglove, a plant used for heart and psychiatric drugs-digitalis.

The first version (shown in the picture) contains the yellow book and several other details. 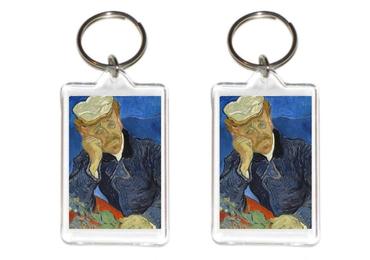 A century after it was completed, this version of the portrait was auctioned to a private collector for a record $82.5 million (including a 10% auction fee). 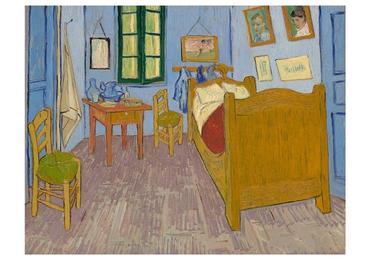 The first version of “Bedroom in Arles” has always been the property of the Van Gogh family. It is permanently leased by the Van Gogh Museum in Amsterdam, the Netherlands.

The second version was collected by the Helen Birch Bartlett Memorial in 1926 and donated to the Art Institute of Chicago.

The third version was once owned by Van Gogh’s sister Will and was later acquired by Japan’s Matsukata Masayoshi. 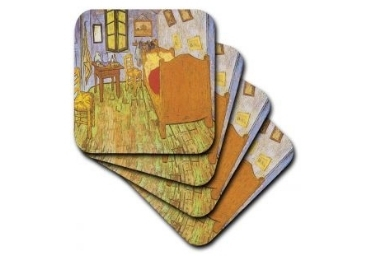 After World War II, it became a national collection of France in 1959 through an agreement between France and Japan and was permanently displayed in the Musée d’Orsay in Paris, France.

In general, Van Gogh’s bedroom paintings are one of his most well-known and beloved works. 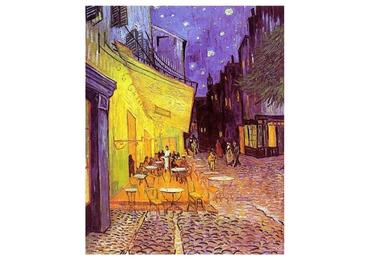 “Coffee Terrace at Night” In mid-September 1888, Van Gogh set up his easel outside the Place du Forum cafe in Arles Square and drew his first “starry night” scene.

The Coffee Terrace at Night presents a sky without black. It contrasts the bright yellow awning with the Persian blue sky. The cobblestone pavement shows the luminous tones of the stained glass windows. 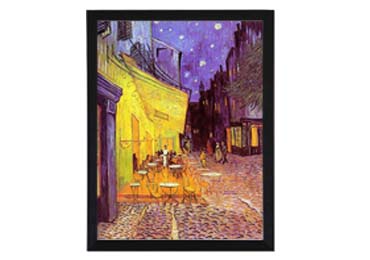 The artist’s love for the night is partly philosophical and partly from the technical challenge of creating dark light. His night scenery expresses mysticism and a sense of infinity. 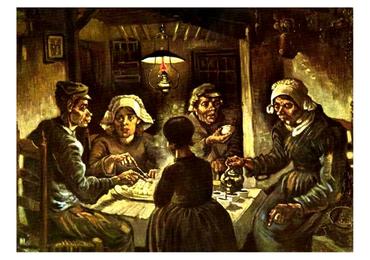 The painter himself said, “The point I want to convey is that, by the light of an oil lamp, potato eaters grab potatoes from their plates with the same pair of hands working on the ground-they are honest and self-sufficient.” 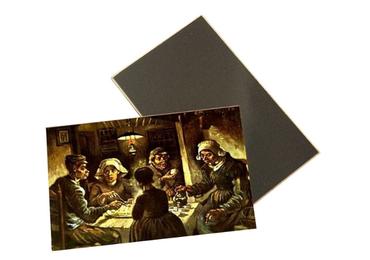 This painting was made when Van Gogh lived in the towns of Ninen, Helvin, and Nijenen in Nieder Wetten in the province of North Brabant, the Netherlands in April 1885. It is also the painter’s best work.

The painting is now in the Van Gogh Museum in Amsterdam. 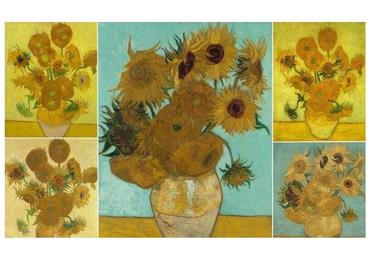 “Sunflower” is a series of still life oil paintings by the Dutch painter Van Gogh. 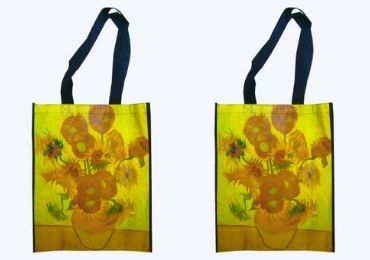 In terms of color use—to a certain extent, it should be attributed to the newly launched pigments that make new hues possible—the expressiveness of the yellow series has been broken. 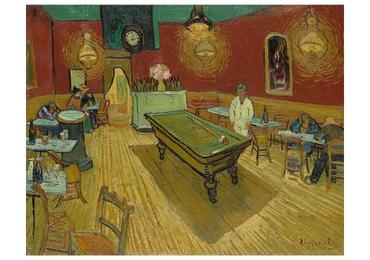 “Night Café” is in early September 1888, Van Gogh drew a scene that he called “one of the ugliest photos I have ever made.”

Violent red and green captured the gloomy interior space in a late-night cafe in Place Lamartine in Arles, France.

While sleeping during the day, Van Gogh worked in the cafe for three nights. He chose the shocking effect of simultaneous contrast to express “the terrible passion of mankind.” 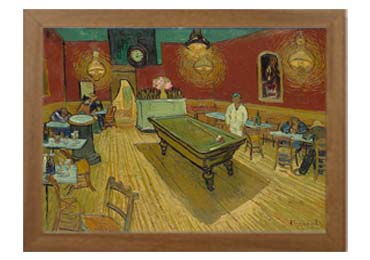 The strange oblique perspective allows the audience to enter the screen and walk towards the abandoned pool table. Scattered chairs and dull figures indicate absolute desolation. The halo lighting effect is reminiscent of Van Gogh’s “The Potato Eaters”. Both paintings express a grim view of the world, and the artist describes them as equivalents.

It is now in the Yale University Art Museum. 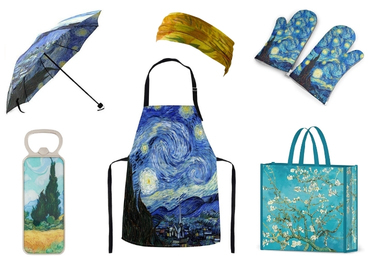 We know how to integrate the travel souvenir industry experience into the art industry and provide a full range of customized gift services for some internationally renowned art galleries, museums, art exhibitions, and immersive art education.

TALMUD has accumulated a wealth of operating experience in the souvenir industry and continues to develop the blue ocean market of artistic souvenirs.

On our website, you can see many souvenirs from famous artists in history, from Leonardo da Vinci to Picasso, from Van Gogh to Monet, from Gauguin to Cezanne, from Mucha to Mondrian, from Rembrandt to Katsushika Hokusai.

If you need consultation or customized gift service in the souvenir industry, please feel free to contact us HERE!