Unlike most Dutch masters of the 17th century, Rembrandt’s work depicted a wide range of subjects, ranging from portraits and self-portraits to landscapes, allegorical and historical scenes, biblical and mythological themes.

Rembrandt never left the Netherlands, but he was heavily influenced by Italian art such as Pieter Lastman, the Flemish Baroque, the Utrecht Caravaggs, and Peter Paul Rubens. 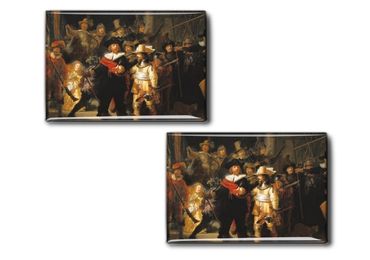 However, his prints and paintings were popular throughout his life, and his reputation as an artist remained strong, having a great influence on the style of many painters in Europe.

Although the artist achieved great success in his youth, Rembrandt’s later years ended in personal tragedy and financial difficulties.

The TALMUD team has very high respect for world art. Based on the detailed study of Rembrandt’s artworks, a series of videos and articles have been produced, hoping to help you. Below are ten of Rembrandt’s greatest works for your reference.

1, Bathsheba At Her Bath 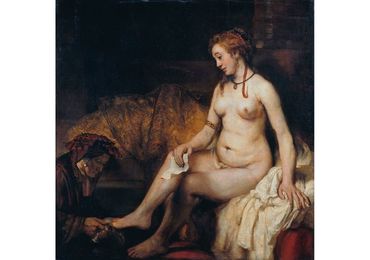 Bathsheba At Her Bath

Bathsheba at Her Bath is a 1654 painting by Rembrandt van Rijn. In this painting, an old story is depicted in which King David saw Bathsheba bathing and was fascinated, seduced, and impregnated. The painting can be viewed at the Louvre in Paris.

This is a story in the Old Testament where David was fascinated by Bathsheba and seduced her into pregnancy, in order to marry her, David sent her husband into battle and secretly killed him. 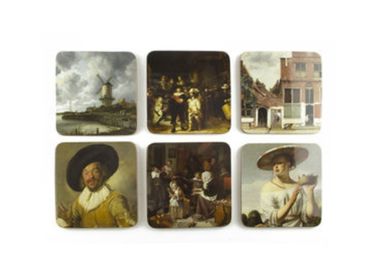 Rembrandt depicts Bathsheba washing her feet with an elderly maid. She has a letter from David beckoning her, and unlike the representations of other artists, Rembrandt’s work is unique in the dynamism of bright colors and dense brushstrokes.

The painting is also notable for its excellent capture of Bathsheba’s moral dilemma, as she looks at nothing when she considers David’s proposal. The painting is known as one of Rembrandt’s most famous nudes and is considered one of the artist’s greatest achievements.

The painting was in the collection of the Louvre in Paris. 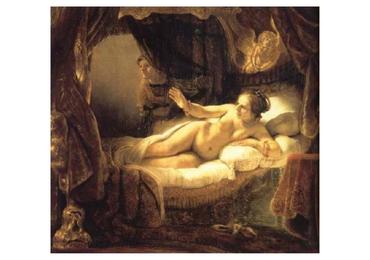 Danaë was completed in 1636, was not only one of Rembrandt’s most magnificent nude paintings, but also one of the famous Dutch artist’s greatest masterpieces.

Danae was a princess in Greek mythology who was imprisoned in a bronze chamber by her father, Acrisius, because it was prophesied that her son would kill him. However, Zeus, the king of the gods, wanted her. He turned into golden rain and came to her room to impregnate her. 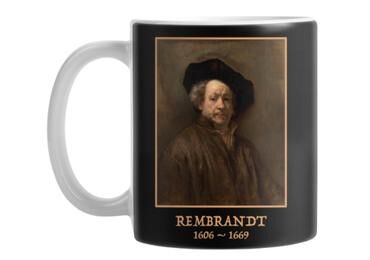 Rembrandt’s painting depicting a nude character welcoming Zeus in bed successfully captures the passion a woman displays when she sees her lover.

The painting was bought by Catherine II of Russia in the 1770s and has been in the Hermitage Museum in St. Petersburg ever since. 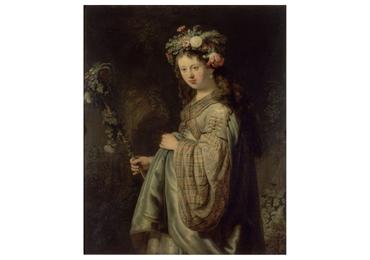 Saskia as Flora is a 1634 oil painting by Rembrandt depicting his wife Saskia van Uylenburgh as the goddess Flora.

Rembrandt’s Flora may have taken some inspiration from Titian’s Flora. Flora, the goddess of flowers, stood in the grotto, looking at the viewer, dressed in a luxurious and peculiar silver-embroidered satin dress and large pearl earrings. 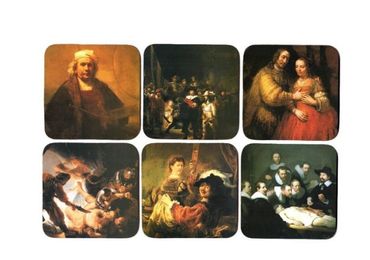 She wears a floral headdress, including a colorful tulip, in her long hair. She also carried a walking stick decorated with leaves and flowers. The painting measures 49 inches by 40 inches. 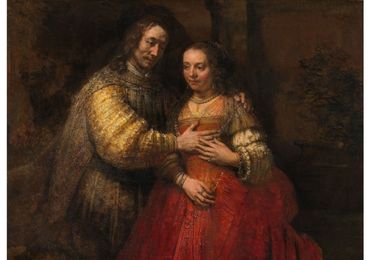 “The Jewish Bride”, painted around 1665‒69, is a Rembrandt painting.

The painting takes its name from an Amsterdam-based art collector who identified the painting as the subject of a necklace given to his daughter by a Jewish father on her wedding day.

Later, some art critics dismissed the proposition, and the two figures depicted are now believed to be lovers or married couples. Speculation about the identity of the couple continues. 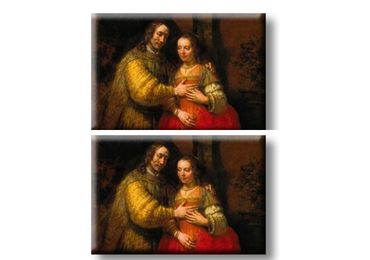 “The Jewish Bride” was created by Rembrandt in what is known as the Fourth Amsterdam Period (1658-69) in his later years. This painting, along with The Return of the Prodigal Son, is the most famous work of his period and shows that the artist’s creative style has matured.

The painting is in the permanent collection of the Rijksmuseum in Amsterdam. Christopher White, a biographer of Rembrandt, called the work “one of the greatest expressions of the tender fusion of spiritual and physical love in the history of painting.”

5, Self-Portrait with Beret and Turned-Up Collar 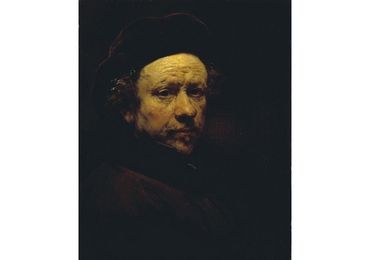 Self-Portrait with Beret and Turned-Up Collar

“Self-Portrait with Beret and Turned-up Collar” is a 1659 painting by Rembrandt van Rijn. It is considered by many art critics to be the best self-portrait ever made.

In this painting, the artist is seated in a large fur cloak with his hands folded on his lap, with the most luminous area showing his face. Rembrandt’s pose was inspired by Raphael’s famous portrait of Balthasar Castiglione. 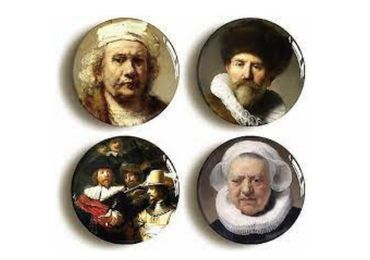 Painted when he was 50 years old, this painting shows his ruthless and sincere portrayal of himself. The artist was living a difficult life at the time, with “the stress and tension of life, a mixture of creative triumphs and personal and financial setbacks”.

Rembrandt is considered one of the greatest artists in the self-portrait genre, and this painting is his most famous self-portrait. Currently in the collection of the National Gallery of Art in Washington, D.C. 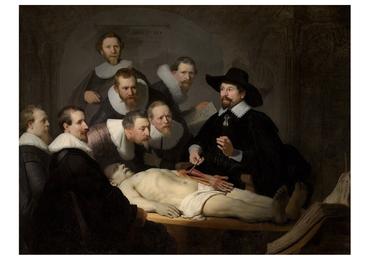 It was commissioned by the Amsterdam Surgeons’ Guild to draw a group portrait for the members of the Doctor’s Guild. The focus of the painting is the corpse. 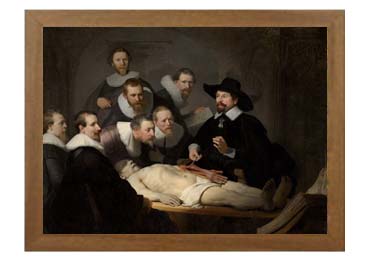 The speaker is the famous Doctor Nicolas Durr. , Occupies the main position, other people are arranged interspersedly in layers, without covering each other, so that people can clearly see their different expressions.

This painting is a 26-year-old famous work by Rembrandt, it is now in the Mauritshuis Royal Museum in The Hague.

7, Syndics Of The Drapers’ Guild 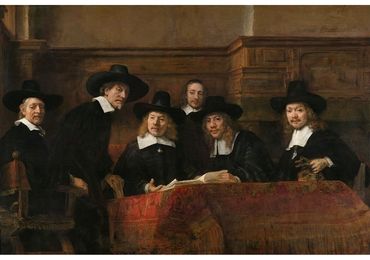 Syndics of the Drapers’ Guild

“Syndics Of The Drapers’ Guild” was a 1662 painting by Rembrandt van Rijn. This painting is also known as The Sampling Officials.

Completed in 1662, this painting, also known as the Syndicate of Drapers’ Guild, is a collective portrait of the Amsterdam Drapers Guild Syndicate whose job it is to assess the quality of fabrics provided by weavers to guild members. 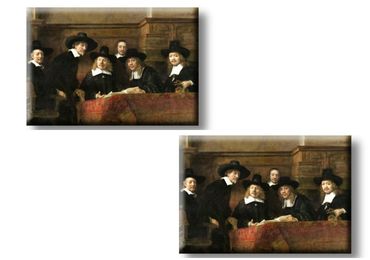 The only exception in the painting is the man in a straitjacket, as he is a servant. The painting was commissioned by the Amsterdam Drapers Guild for their Guild Hall, which housed it until the early 1770s.

The painting is now in the Rijksmuseum in Amsterdam and is one of the museum’s greatest treasures.

8, The Man with the Golden Helmet 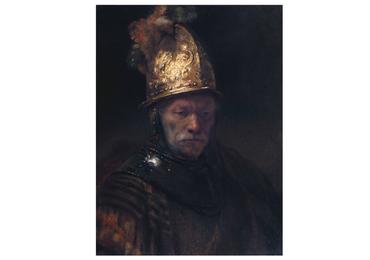 The Man with the Golden Helmet

“The Man with the Golden Helmet” is a painting by Rembrandt van Rijn in 1650. This painting is an excellent example of Dutch Golden Age painting.

In terms of content, “The Man in the Golden Helmet” can be understood to represent Mars, the god of war, and a gorgeous and shiny helmet has long been regarded as his attribute.

The helmets in the work are heavily painted and strongly reflective, showing in particular that Rembrandt’s approach is exaggerated. 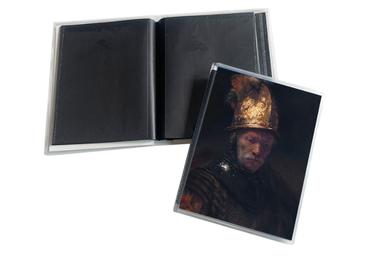 The dark, almost graphic presentation of the face is also incompatible with Rembrandt’s signature style.

These details are the basis for later critics to question its authorship. The painting was restored in the 1980s.

The painting is now housed in the Gemäldegalerie in Berlin.

9, The Storm on the Sea of Galilee 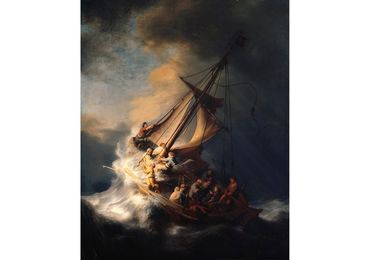 The Storm on the Sea of Galilee

The miracles of Jesus are supernatural acts attributed to him in the Gospels. In one such act, Jesus rescued his disciples by calming a storm while they were sailing across the Sea of ​​Galilee. 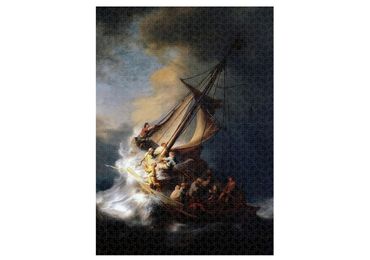 This miracle is depicted in Rembrandt’s painting, which was created in Amsterdam when the artist was in his 20s, and is one of his early masterpieces.

“The Storm on the Sea of ​​Galilee” is famous for being the only seascape Rembrandt has ever seen. The location of the painting remains unknown since it was stolen from the Isabella Stewart Gardner Museum in 1990. 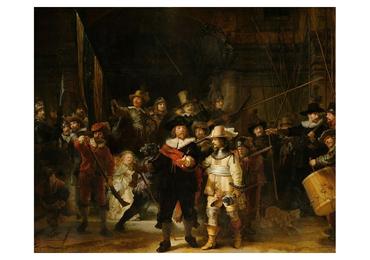 “The Night Watch” (Dutch: De Nachtwacht) is a famous painting by the Dutch Golden Age painter Rembrandt in the 17th century.

Completed in 1642, it is a masterpiece of the golden age of Dutch portrait painting. This painting is a portrait of Rembrandt hired by the Amsterdam Archer Company.

What this painting depicts is actually the scene of the captain and the deputy captain (the two characters in the middle of the screen) during the day, which was mistaken for depicting the night due to the dim light. 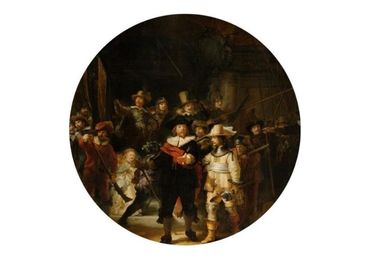 It is worth mentioning that a little girl appears in the picture. Logically, it is very untimely for the little girl to appear in this painting, but Rembrandt’s treatment makes it not very obtrusive and looks very natural.

It is now in the collections of the Amsterdam Museum in the Netherlands. 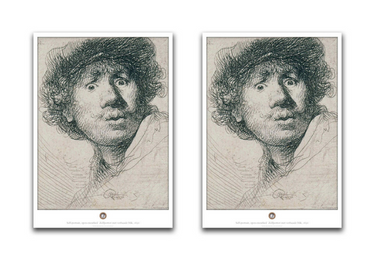 The Rijksmuseum is the largest and most prestigious museum in the Netherlands. There is a large collection of works by Dutch masters such as Rembrandt van Rijn, Johannes Vermeer and Frans Hals, Van Gogh, Piet Mondrian.

Rembrandt van Rijn is one of the most famous painters in history. He is a master of light and shadow, and his paintings are some of the most iconic in the world.

If you are an art lover, the Rijksmuseum is definitely worth a visit. With its world-renowned collection of paintings, sculptures, and other objects, there is something for everyone.

Based on the styles of these artists, the TALMUD team has developed a series of customized art souvenirs, providing exclusive customized souvenirs and gifts for museums, galleries, experiential art exhibitions, etc.