Pierre Auguste Renoir (February 25, 1841—December 3, 1919) was a French artist who was the leading painter in the development of the Impressionist style.

He was born in 1841 and died in 1919. During his lifetime, he created more than 6,000 paintings and drawings, making him one of the most prolific artists of all time.

The French artist paints with bold brushstrokes and delicate details. He was one of the most important figures in the 19th-century art world, but his life story is as fascinating as his paintings.

Renoir’s father wanted him to be an engineer, so he studied engineering at school for two years before dropping out to pursue painting. He went on to become one of the most famous artists in history – there’s even a museum dedicated to his work!

Below are 10 of Renoir’s most famous works handpicked by the TALMUD team for your reference. 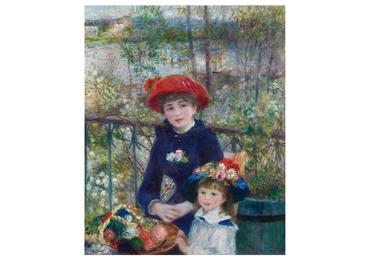 In “Two Sisters”, Renoir depicts two lovely teenage girls on a warm and beautiful day. The older girl in the painting is wearing a navy blue velvet coat, looking forward, looking conceited but charming; the younger girl seems to suddenly burst into the picture, cute and innocent.

Set against the background of rowboats and sailboats moored in the harbor and elevated to mid-air, “Two Sisters” depicts a spring in Chatou, France, the suburban town where Renoir spent 1881 of spring. 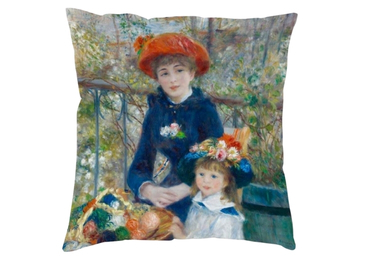 Technically, the work has a powerful force: Renoir places actual, almost life-size figures in front of a stage-like landscape, creating a realm of pure vision and fantasy.

The sewing basket in the left foreground is reminiscent of the artist holding a palette as if he mixed, diluted, and reconstituted the bright and pure paint in the basket to paint the rest of the painting.

Renoir portrayed his artistic talents in Two Sisters. Showing an attractive young woman with her sister beside her on a beautiful day. 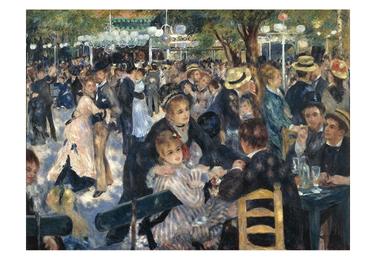 “Dance At The Moulin De La Galette” is one of the works of the French pre-impressionist painter Renoir in 1876.

The nineteenth-century French painter Renoir used a more optimistic theme in this work, where the light shines through the shade of the tree and shines on the human body, presenting a mottled situation. It depicts the flash of color in the spot of light, fully capturing the generalized momentary impression created when the light falls on the scene.

The figures are in the shade, the light shines through the shade on their clothes, faces, and there is an impressionistic airy composition. The foreground to the background changes rapidly, and the background develops to a higher place, showing that the human figure gradually dissolves in the sunlight and air. 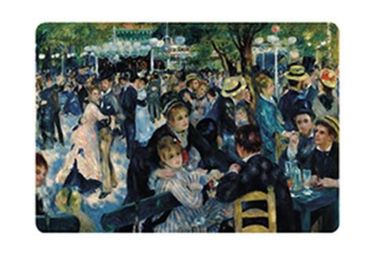 The brushstrokes are loose, the characters on the screen are different from traditional paintings, and the light on the face feels confusing and obscured, not focusing on the real sense of skin, the depth of the face is depicted, the eyes are covered by shadows, It doesn’t look very interesting.

Renoir captures the mysterious hues cast by people in nature, through the shade and light of the trees. In the presentation of tones, he used the method of color used by the Impressionists.

It is currently in the collection of the Musée d’Orsay in Paris, France.

3, Luncheon Of The Boating Party 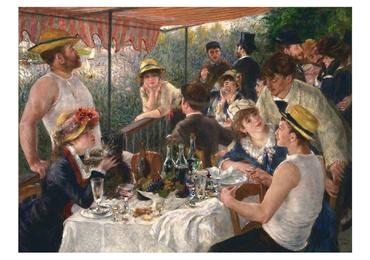 Luncheon Of The Boating Party

“Luncheon Of The Boating Party”, completed in 1881 when Renoir was 40 years old, is the most recognizable and greatest work of his artistic career.

The work depicts Renoir’s friends entertaining on the balconies of restaurants along the Seine. On the balcony of the Maison Fournaise restaurant on the Seine River, wine tasting and pleasant conversation. 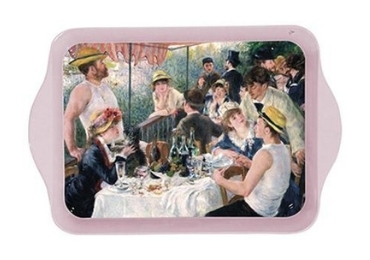 Parisians often go to the Maison Fournaise restaurant, rent a boat, taste the food, or spend the night. This painting is characterized by rich forms, smooth brushstrokes, and dancing light and shadow.

The picture is full of life, the light permeates every corner, the wine bottle on the table shimmers in the sun, the light spots dance on the leaves, the painting combines three painting types of figure, still life and landscape, with smooth brushstrokes and soft color rendering. 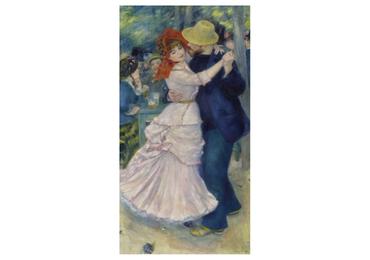 Dance at Bougival, created in 1883, is one of three paintings in the Renoir Dance series, the other two being City Dance and Country Dance.

In the three paintings, there are three pairs of dance partners, three occasions, three dance parties, and three love stories. The outdoor dance party is a little more relaxed and leisurely because of the integration of sunlight, air, birdsong, and trees, and the air seems to be filled with the smell of love.

Under the man’s affectionate gaze, the young and beautiful girl turned to one side shyly, with a faint blush on her face. 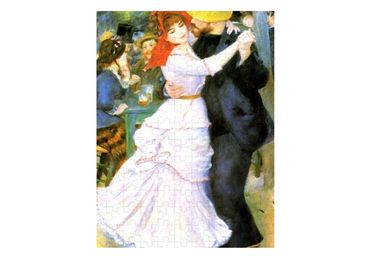 The color matching is simple and bright. The women’s white dress is embellished with light red lace and a red hat, which forms a sharp and harmonious light and dark contrast with the men’s dark clothes and yellow hat.

Black and white is always the most classic fashion, but unlike the later “City Dance”, the black and white here are full of joy and ease, just like the gauze dress on a girl, giving people a pleasant feeling.

Now in the Museum of Fine Arts, Boston, USA.

5, Girls at the Piano 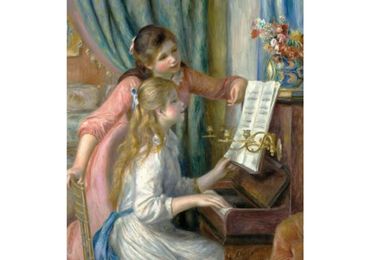 Girls At The Piano

Girls At The Piano (Jeunes filles au piano) is a painting by French Impressionist painter Pierre-Auguste Renoir, created in 1892.

The painting was commissioned by the Luxembourg Museum. Renoir shows two young girls next to a wooden piano, one in a white dress, sitting down, seemingly ready to play the piano. And another girl stood beside her reading the notes. 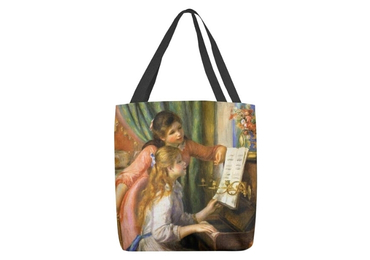 “Girls At The Piano” belongs to the Impressionist style. The whole painting is colorful, extremely soft and graceful, with smooth lines, and the whole picture is full of a sweet and innocent atmosphere.

The painting is currently in the collection of the Musée d’Orsay in Paris, France. 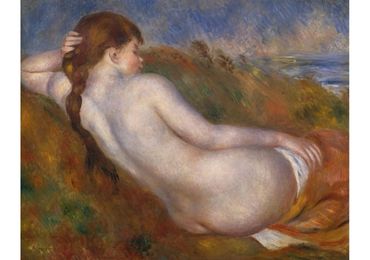 “Reclining Nude” was created in 1883, is one of a series of nude portraits by Pierre-Auguste Renoir. The work is in the collection of the Metropolitan Museum of Art, New York.

Female nudes became one of the central themes of Renoir’s later works, which were expressed in various forms, such as static nudes, bathing nudes, single nudes, and combined nudes.

The systematic works of the female nude testify to the influence of classical and renaissance art on the creation of Renoir, and the nude was a staple of both movements: from Venus di Milo, through Giorgione and Titian to Rubens.

The artistic technique of women turning their backs to the audience in this work originated from the great neoclassical painter Ingres and his maids. Therefore, the 1880s is known as Renoir’s “Ingres period”. 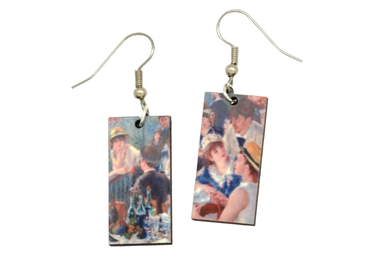 Auguste Renoir helped pioneer the Impressionist school of painting with his intuitive, emotional handling of color and a broad vocabulary of short, quick, and loose brushstrokes. Together with Claude Monet, Renoir placed spontaneity and the specificity of light above traditional artistic techniques. This is also one of the classic techniques of Impressionism.

Renoir’s cheerful, light-filled landscapes and portraits remain among the most recognizable works of art in the Western canon. His works typically sell for eight figures at auction and are collected by numerous museums, including the Musée d’Orsay, the Metropolitan Museum of Art, and more. 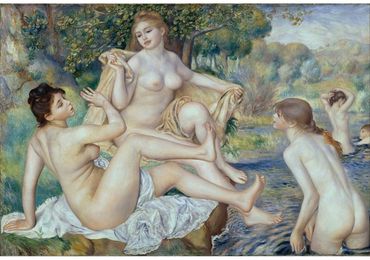 This painting depicts a group of nude women in a forest glade. Painted at the height of the Impressionist movement, it is described as Renoir’s most ambitious work. Currently in the collection of the Philadelphia Museum of Art, Pennsylvania, USA.

This work can be seen as the culmination of his “Ingres period”. A group of female nudes plays in the rural scenery of small rivers and waters. The characters are round and three-dimensional. 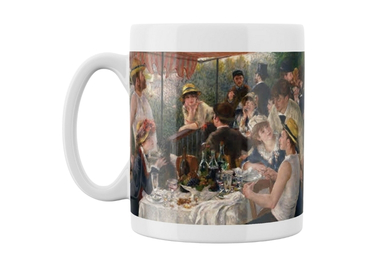 Although it took Renoir three years on the painting to be satisfied with its composition and finally finished, the painting was criticized by critics for its sculptural fluidity and artist perception Changes in style.

The encounter left Renoir exhausted, claiming that he would never devote so much time to work again. 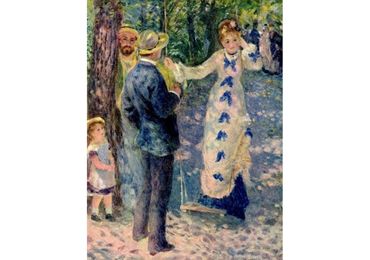 “The Swing” is an oil painting created by French artist Pierre-Auguste Renoir in 1876. The painting measures 92 x 73 cm and is now in the collection of the Musée d’Orsay.

A girl stands on a swing, and a young man speaks to her with his back to the audience. She turned away, while one child looked up at the man, another stared at him from the background. 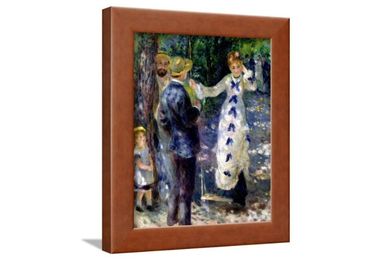 A pink dress with a hat on the head adds to the charm of the painting. Sunlight is broken by shadows as it passes through trees, and quivering light is rendered by pale patches, especially on clothing and the ground.

Renoir created the painting in what is now the garden of the Montmartre Museum. The model was Jeanne Samary, a favorite of Renoir who appeared in many of his paintings. 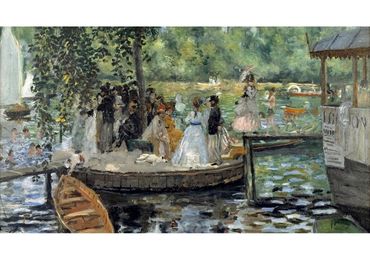 “La Grenouillère” is an oil on canvas by Pierre-Auguste Renoir from 1869, now in the National Museum in Stockholm.

This painting is very story-telling. It was created in the early days of Impressionism, and in the summer of 1869, Renoir and Claude Monet began sketching by the water at La Grenouillère, a boating and bathing resort on the Seine outside Paris. 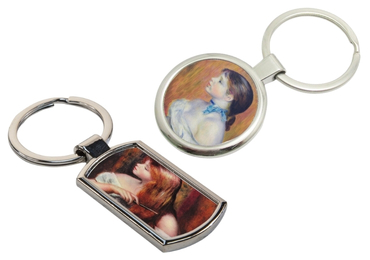 This was a watershed moment in the history of Impressionist art, as the two developed some of the theories, techniques, and practices that would give rise to Impressionism, creating a “classical Impressionist painting language.” 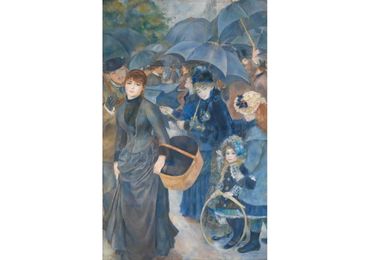 The Umbrellas is an oil on canvas by Pierre-Auguste Renoir, now in the collection of the National Gallery, London.

One reason this work is famous is that it was painted in two phases by the artist in the 1880s. Renoir began working with Impressionist brushstrokes and vibrant tones around 1881. In 1885, he completed the painting using the inspiration of classical art. 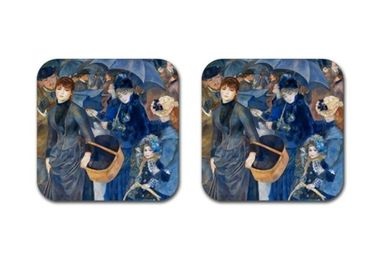 The painting is 180.3×114.9 cm high. It depicts a busy street scene in Paris with most people using umbrellas to keep out the rain. On the right, a mother looks down at her daughters, each dressed in late 19th-century fashion.

The main female figure on the left side of the picture is usually considered to be Suzanne Valadon, Renoir’s lover. The focus of the painting is not in the center, and the composition appears natural.

The angles of the umbrellas are carefully placed to form geometric shapes, with many figures truncated by the frame, while the main figure’s bandbox and the girl’s hoop add rounded elements. 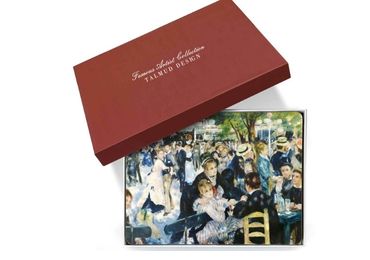 Pierre-Auguste Renoir was a French painter. He was one of the founders and main advocates of Impressionism, an artistic movement that revolutionized European painting and sculpture in the second half of the 19th century.

His work is characterized by vibrant colors, fluid brushstrokes, and light from the outdoors – all in a word, all about summer!

If you are looking for some inspiration to make artistic custom gifts, souvenirs, welcome to contact the TALMUD team, our Pierre-Auguste Renoir series of souvenirs, can give you many choices.