Gauguin is a well-known representative of French Post-Impressionism, and he was an artist of the same period as the famous Dutch painter Vincent van Gogh. He tried to achieve in his works a “primitive” expression of mental and emotional states.

Paul Gauguin was also an important figure in the Symbolist art movement of the early 1900s. His use of bold colors, exaggerated body proportions, and stark contrasts in his paintings set him apart from his contemporaries and paved the way for the primitivist art movement.

Gauguin’s artistic creation was influenced by the cloisonne style, and he was also an influential practitioner of woodcut and woodcut art forms. The artist’s remarkable achievements influenced the French avant-garde and many modern artists such as Pablo Picasso and Henri Matisse.

At the end of his life, he spent ten years in French Polynesia. Paintings from this time depict figures or landscapes of the area.

Here are 10 pieces great paintings by Paul Gauguin for your reference. 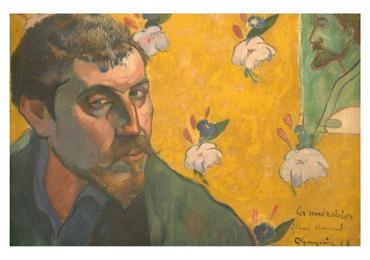 This painting is a self-portrait given to Van Gogh by Gauguin, with Bernard’s head in the upper right corner. Bernard is a good friend of the two. It is currently housed in the Van Gogh Museum in Amsterdam, the Netherlands. 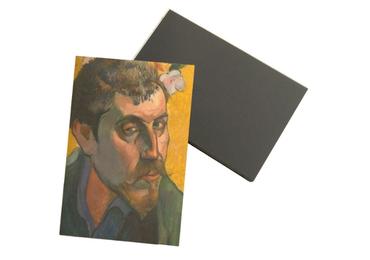 Paul Gauguin had a very close relationship with the contemporary Impressionist artist Vincent van Gogh, and they had frequent exchanges for a while.

This work is a portrait created by Gauguin in 1888 at the request of Vincent van Gogh and given to him. The exchange of paintings and the sharing of artistic theory and practice were the means by which these great contemporary artists continued to make progress. 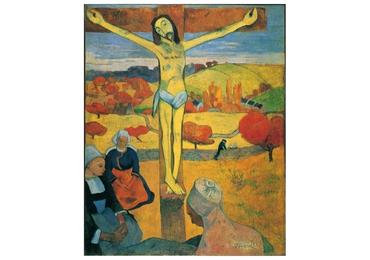 “The Yellow Christ” was created in 1889 and was painted in the same way as “Fantasy after the Sermon”: it shows three peasant women kneeling in front of the cross on which Christ was crucified. The figure of Christ is rather crudely drawn, and the generalized physical treatment of this statue shows the characteristics of folk creation.

Gauguin’s expression of the bleak, barren, and autumnal colors of the landscape focuses on another aspect, namely, the yellow tones of the idols and their relationship to the yellow background and blue shades. 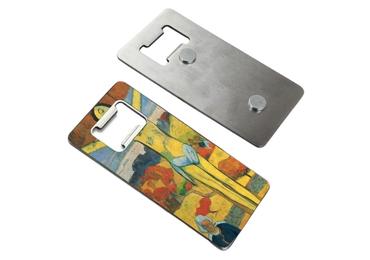 Therefore, Gauguin’s symbolism is only a means for the painter to express his inner heart indirectly. Scenes of everyday life are just the medium he uses to create decorative rhythms and landscape motifs. And this decorative rhythm and landscape theme always seems to be a symbol of the sadness that accompanies religious sentiments.

Currently in the collection of the Opalett Knox Gallery in Buffalo, USA.

3, When Will You Marry 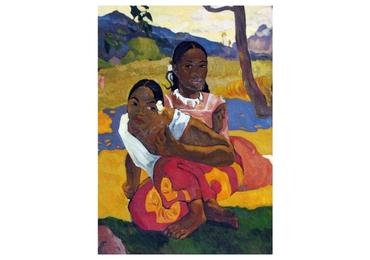 When Will You Marry

“When Will You Marry?” was created by Gauguin in 1892. There are two Tahitian women in the painting. The painting uses tropical scenery as the background. The color style is enthusiastic and bold, but the author lived lonely and depressed in his later years.

The artist depicted the women in the work as slightly naive, with broad shoulders, round limbs, and dark skin, as if timidly looking at civilized people in an unfamiliar world from the painting. 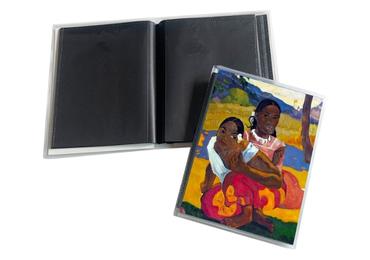 When Will You Marry Photo Album

They have prudent and friendly eyes and a quiet attitude, but they deliberately keep a certain distance from you. Not only is there no pretense at all, but they also have a natural elegance.

The painting was originally owned by a Swiss collector. It was later sold for $300 million in 2015, setting a record for the most expensive sale of art.

4, Spirit Of The Dead Watching 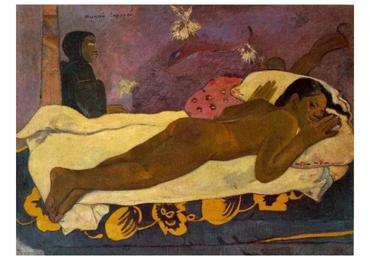 Spirit Of The Dead Watching

The yellow of the sheet in “Spirit Of The Dead Watching” connects the purple background with the orange-yellow human body and the blue bedspread here.

What emerges before our eyes is a sudden, radiant harmony that makes one feel as if it were the kind of phosphorescent flickering that Māori people see as wandering spirits. 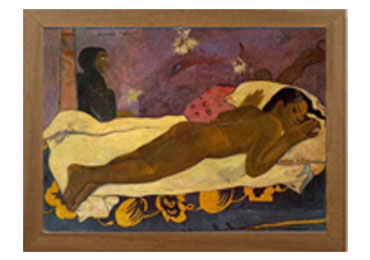 Unfortunately, because Gauguin followed the principles of symbolism, he introduced the image of ghosts in the painting. The nudity in this painting itself is very realistic, so the less naturalistic and bizarre there is in the painting, the more she stands out from the symbolic and decorative elements.

5, Woman With A Flower 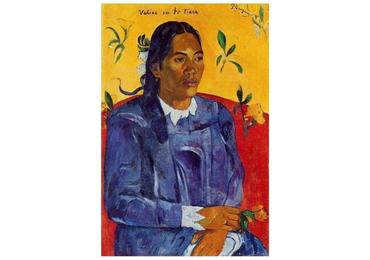 Woman With A Flower

“Woman With A Flower”, also known as “The Young Girl of Tahiti”, is a work created by Gauguin in 1891.

In this painting, a Tahitian woman is dressed in blue-purple clothes, with brownish-yellow skin and blue-black hair. The whole piece is orange-yellow in the upper half and red in the lower half, in front of a bright background with scattered green leaves.

Certain structural, proportional, volume and light presentation flaws in this painting have also become invaluable because they reflect the freshness and vividness of the expression technique and the unrestrainedness of the artist’s creation. 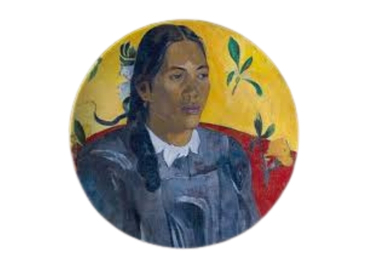 Woman With A Flower Pin

Later, Gauguin also produced some beautiful works like this, but this work is considered to be the best artistic creation in the same style of the artist. 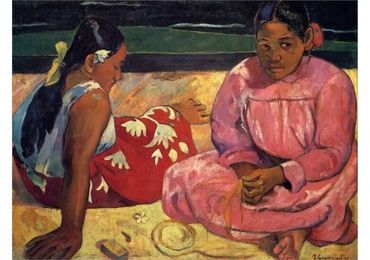 Tahitian Women on the Beach is an 1891 painting by Paul Gauguin. The painting depicts two women on the Pacific island beach of Tahiti.

The painting is currently in the collection of the Musée d’Orsay, located in Paris, France. 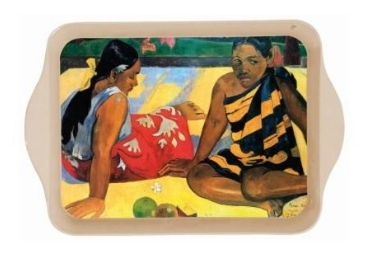 In artistic creation, different post-impressionist painters have different handling skills on how to combine solid forms and flat patterns. Seurat solved this problem by stippling, Cezanne solved it by employing color modeling.

In this painting, Gauguin often used a flowing frieze for the same purpose, connecting solid and surface by other means.

7, The Painter of Sunflowers 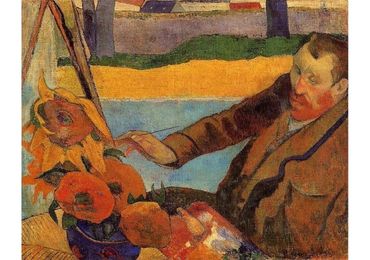 The Painter of Sunflowers

The relationship between Paul Gauguin and Van Gogh can be reflected a certain extent from the painting “The Painter of Sunflowers”.

This work was created in November 1888, Paul Gauguin painted Vincent van Gogh in “The Painter of Sunflowers”. The pair had been living in a yellow house in the southern French town of Arles at the time.

The painter Vincent works in front of the canvas, holding a drawing board in his left hand and a brush in contact with the canvas in his right hand. Gauguin placed the artist on the right edge of the canvas, his arms reaching out of the painting. Opposite Van Gogh is the canvas. 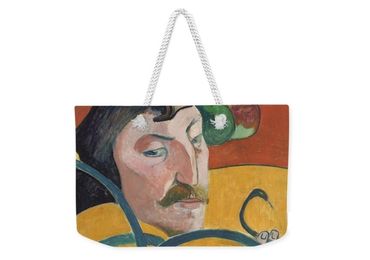 As a portrait, it is a testimony to the interaction of two Post-Impressionist painters of a particular period. Later, although the relationship between Gauguin and Van Gogh became increasingly tense and no longer in contact, Gauguin still loved the works of Van Gogh’s sunflower series.

And Gauguin’s “The Painter of Sunflowers” can be regarded as a tribute to Vincent! 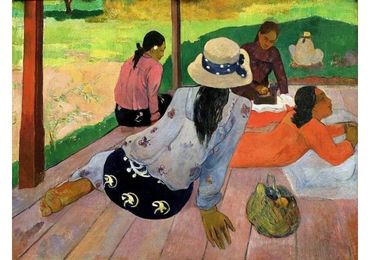 Siesta, an oil poster by Paul Gauguin, circa 1893, is an unpretentious depiction of a group of Tahitian women dressed in Western clothing, in the hot afternoon sun, among the cool trees on their balconies Chat in the shade.

In hot weather, women rest on covered balconies and shady grasses. One of them is ironing while the others are doing nothing.

They were both native Tahitian women, but the loose European-style clothes and colorful prints seemed particularly reminiscent of these kinds of magazines. 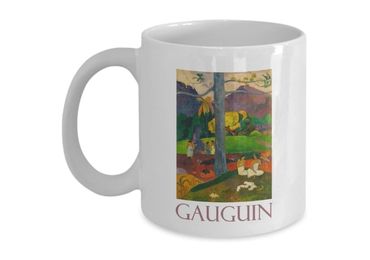 It was created during Gauguin’s first long trip to Tahiti and is now in the collection of the Metropolitan Museum of Art in New York. 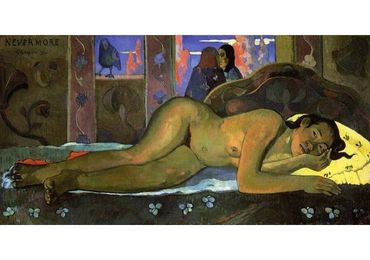 “Nevermore” is an 1897 oil painting by French Post-Impressionist artist Paul Gauguin, created during the artist’s second stay in Tahiti.

This enigmatic piece depicts a naked Pahura, Gauguin’s wife lying on a bed in their cottage, her sensual figure echoing the curves of the headboard. A crow and two mysterious figures can be seen in the background behind the bed.

The appearance of the raven is clearly an echo of Edgar Allan Poe’s 1845 poem “The Raven,” well known to Gauguin and at his 1891 farewell party. In this poem, the crow utters the word “never again” in response to a question from a mourning student. 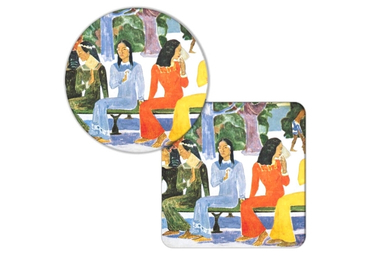 It has been in the collection of the Courtauld School of Art and exhibited in the gallery since 1932.

Where Do We Come From? What Are We? Where Are We Going?

“Where Do We Come From? What Are We? Where Are We Going?” is one of the most famous works of French artist Paul Gauguin. The painting was regarded by Gauguin as a masterpiece, considered “a philosophical work comparable to the subject matter of the Gospels”.

Known for its mysterious subject and atmosphere, the painting highlights the post-Impressionist style of art. Gauguin’s artistic character conveys an emotional or expressionist power through the vivid use of color and heavy brushstrokes. 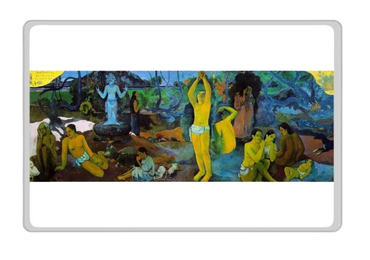 At the end of 1897, Gauguin was terminally ill, and he hoped to paint a great and last testament before his death, and this masterpiece was born.

This painting was created in Tahiti and is now in the collection of the Museum of Fine Arts in Boston, Massachusetts. 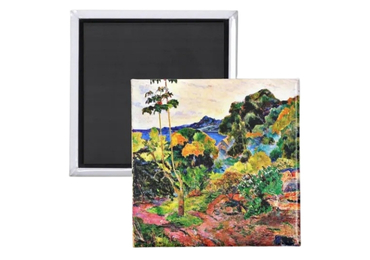 Paul Gauguin is one of the most famous Post-Impressionist painters in the world. He is known for his colorful and unique paintings, which often depict life in Tahiti.

A French Post-Impressionist painter living in the late 19th century, Gauguin is best known for his bold use of color and his distinctive style that departed from traditional European painting. His art has greatly influenced many artists throughout history, including Pablo Picasso, Henri Matisse, and Vincent van Gogh.

The TALMUD souvenir development team has developed a series of customized art souvenirs based on a detailed study of Gauguin’s artworks, which are liked by artists and art fans.

Whether you are an art museum manager, an art painter, or an art exhibition planner, TALMUD’s professional art souvenirs can provide you with more ideas to help you succeed in custom souvenir retailing.