The artist’s work is a bridge between Impressionism at the end of the 19th century and Cubism, a new line of artistic exploration at the beginning of the 20th century. Both Matisse and Picasso considered Cezanne “the father of all of us”.

Paul Cézanne’s exploration of geometric simplification and optical phenomena inspired many painters of the 20th century to experiment with simplified and complex multiple views. His work demonstrates his mastery and use of design, color, composition, and cartography.

Cézanne often employs repetitive, sensitive, and exploratory brushstrokes to achieve a high degree of character and clarity. He uses planes of color and tiny brushstrokes to form complex fields that demonstrate both the sensual effects of the eye and the abstract logic of nature.

The artist’s paintings convey Cézanne’s in-depth study of his subject, an exploratory gaze, and a dogged effort to grapple with the complexities of human visual perception.

This is his contribution to world art. Here are 10 of the most famous paintings by one of the greatest painters of all time. 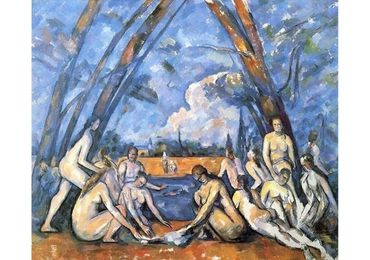 “The Bathers” is an oil painting by French artist Paul Cézanne first made public in 1906.

The painting is sometimes referred to as “The Big Bather” or “Large Bather”, (to distinguish it from the artist’s other smaller works of the same subject), and is considered one of the masterpieces of modern art, and is generally regarded as one of the Cézanne’s best work.

In each version of “The Bathers”, Paul Cézanne tries to keep his work from being sought after by novice audiences, by escaping the ephemeral fads, by breaking away from the traditional form of painting, and giving his work a timeless quality.

Doing so paves the way for future artists to ignore current trends and paint works that are equally appealing to all generations.

The abstract nude women in “The Bathers” endow the painting with tension and density. The artist’s skill in dimensional symmetry is remarkable, adapting nude forms to triangular patterns of trees and rivers.

The skill in the depiction of landscapes and still lifes also reminds the Great Bathers of the works of Titian and Peter Paul Rubens. It is also often compared with the famous Spanish artist Picasso‘s “Les Demoiselles d’Avignon” of the same period. 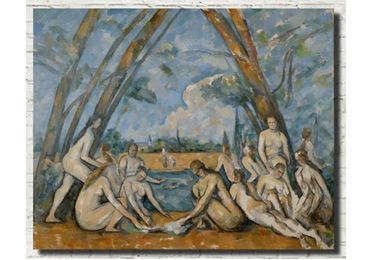 It took Cézanne seven years to create the painting, which was still unfinished when he died in 1906. The painting was purchased in 1937 by Joseph E. Widener, a major benefactor to the Philadelphia Museum of Art.

The painting, on display at the Philadelphia Museum of Art, is the largest in a series of Bather paintings by Cézanne; others are at the Museum of Modern Art in New York City, the National Gallery in London, the Barnes Foundation in Pennsylvania, and the Art Institute of Chicago. 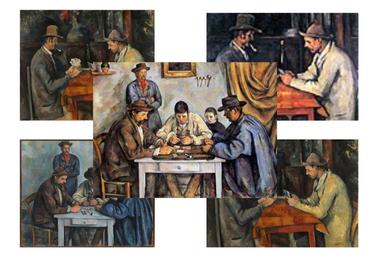 “The Card Player” is a series of paintings by Paul Cézanne, completed in Cézanne’s final painting period in the early 1890s. There are five pieces in this series, all of different sizes and characters. In addition, Cezanne drew some drafts for this series of works.

The largest one of “The Card Player” was completed between 1890 and 1892 and is now in the collection of the Barnes Foundation in the United States. There are five characters in the painting. The person standing behind may have been specially added by Cezanne in order to enhance the depth of field. 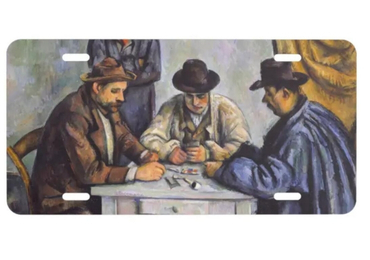 The composition of another “Card Player” from the Metropolitan Museum of Art is similar to the largest one, but only half the size of the latter. X-ray and infrared studies have found that there are layers of paint underneath this painting. And graphite, which means that it may be the first painting painted by Cézanne after repeated modifications, rather than the second. 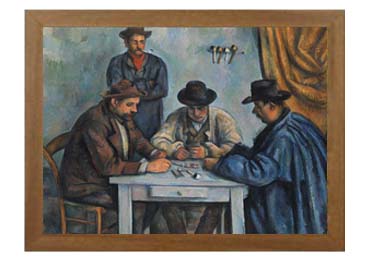 The composition of “The Card Player” was further refined in the last three works. Cézanne deleted the bystanders in the background so that the audience’s attention was focused on the card player. The smallest of these three paintings is now in the Musée d’Orsay in Paris. Art historian Meyer Shapiro said this is the most perfect one in the “Card Player” series.

In addition, it may also be the last picture in this series. The remaining two paintings are in the collection of the Kotoud College of Art in London, and the other is in the hands of private collectors. 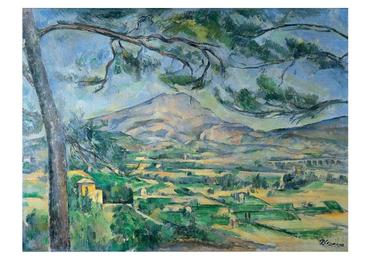 Mont Saint-Victor is a mountain in France. Since Cézanne’s hut can see the entire mountain, he has painted dozens of works for this mountain. 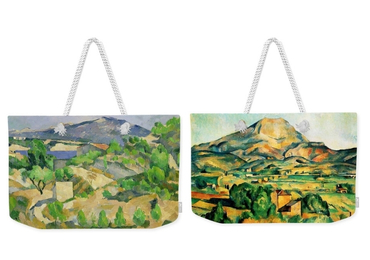 The blue on the mountain is the impression of the air. This painting is a work of post-impressionism. Cézanne, an analytical post-impressionist painter, paid great attention to color blocks and shapes when painting these paintings.

He uses geometric figures to depict natural scenery and then uses different colors to express the depth of the image.

4, Still Life With A Curtain 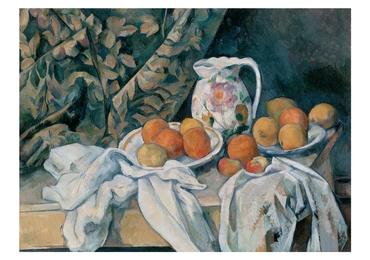 Still Life With A Curtain

“Still Life With A Curtain” was made by French artist Paul Cezanne in 1895.

In Cezanne’s still life works, apples often become his “still life” sketches. Several apples are placed messily on a table or fruit plate on a tablecloth, which is a particularly interesting picture.

When Cezanne’s still life apple appeared, the western art world was shocked. This is an apple with no politics, no so-called thoughts, no ambition, no rush, no pretending to be deep, it is fresh, fragrant, real and tangible, faithful to its natural attributes, quiet and shiny. 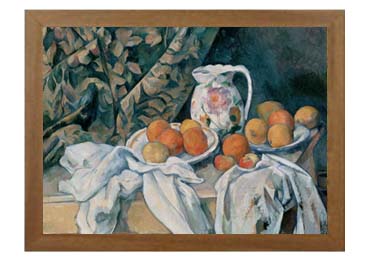 All the women under Cezanne’s brush seemed to have an apple-like temperament. They sat there, without the so-called ambition of working hard for the future, they were so quiet that they were just an apple. 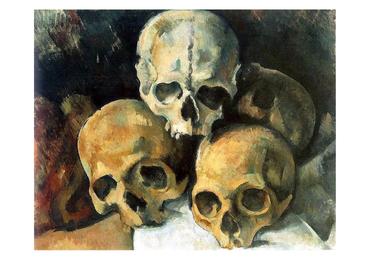 “Pyramid of Skulls” was made by French artist Paul Cezanne in 1901. It depicts four human skulls stacked into a pyramid. Pale light and dark background painting, the skull pyramid is outstanding in the artist’s work.

“No other painting can approach the audience as close as Cezanne’s painting.” Art historian François Garchamp commented, “These skulls can give the audience a shock that comes from the confidence of long-term still life paintings. ” 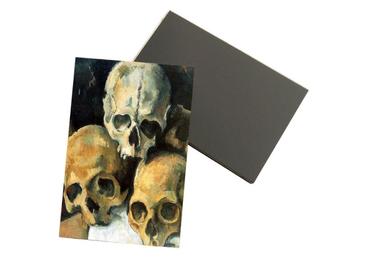 Some of these works are painted with oil and watercolor, contrasting in meaning and visually more subtle. Compared with traditional methods, the subject of the painting is more vivid.

“Skull Pyramid” is unique among the artist’s work, and Cezanne’s way of placing objects so close to the viewer has inspired many artists, including Picasso and Andy Warhol. 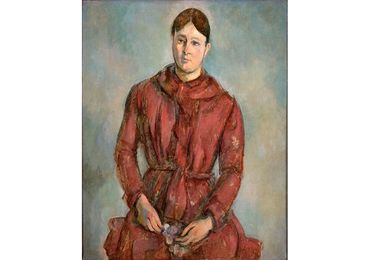 “Portrait of Madame Cézanne” was painted by French painter Paul Cézanne during the period 1888-1890.

The painting looks quite ordinary as if it has no profound meaning. A woman in a red coat sits on a chair honestly, even a little stiffly. The background behind is also very simple, with no patterns or other visually appealing things.

In addition to the simplicity of the background and foreground, we even saw that the faces and hands of the characters were not drawn very vividly and carefully as we expected. 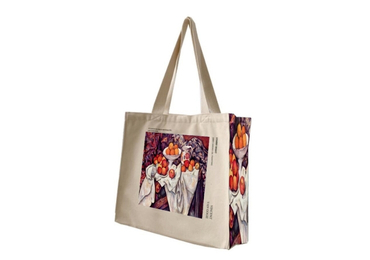 But in Cezanne’s view, this kind of rational order is very important. He felt that painting can be innovated and can introduce light and color, and the rationality and order in the painting cannot be given up, otherwise, a painting will fall out and not stand up.

Color should reflect depth, distance, shape, and even entity. He said very vividly, he said, “I want to make Impressionism a stronger, more attractive, and museum-like art.” 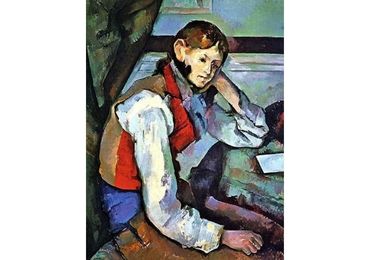 The Boy In The Red Vest

“The Boy In The Red Vest” was a painting by Paul Cézanne in 1889 or 1890. It is one of the representative works of the artist’s mature period.

A boy is depicted in the center of the painting. He was sitting at a table, facing to the right. His torso was bent, his left arm supporting him feebly. The boy’s head rested on the hand supporting his cheek.

The painting is organized by three main diagonals: the angle of the boy’s sloping back and head, the angle of the dark green curtain behind the boy, and the long angle of the seat and table that rise from the lower left. These three angles are offset by the angles of the boy’s thighs and arms, creating a tightly connected structure of intersecting diagonal lines. 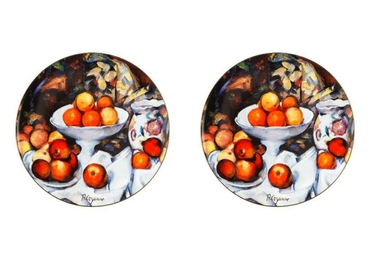 He was wearing simple clothes and a white shirt with a red fabric vest on the front and ochre on the back. Bring a pair of blue pants. On the left is the dark interior of the room. The front wall is lighter, on which one can see the details of a painting.

Cézanne painted four oil portraits of the Italian boy in a red vest, in varying poses, allowing him to study the relationship between figures and space. The most famous of the four, and the one that this title usually refers to.

“Here there is a perfect balance of high compositional intelligence and spontaneous pictorial intuition.” In 1895, the art critic Gustave Geffroy said it was comparable to the finest figures of the Old Masters. 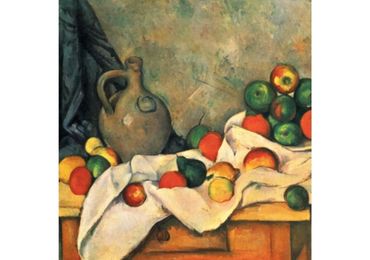 Painted in 1893-1894, this work is Paul Cézanne’s most famous still life, and the intimate nature of these works reveals Cézanne’s introverted character. It also holds the record for the most expensive still-life painting ever sold at auction.

A white pot is placed in the center of the painting, with two plates on either side of it. The plate on the left is white with a linear decoration on the edge and five fruits on it. The plate on the right is smaller, with only three apples. Other fruits line the back of the small plate and the front of the kettle. 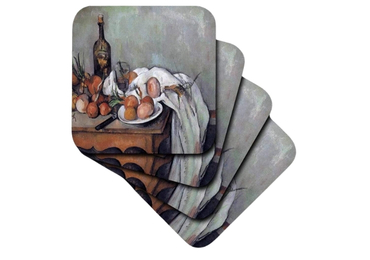 On the support surface of the painting, some clothes hanging on the edge. The cloth on the right completely covers the corner of the table and extends down from the edge of the painting. On the left, another light-colored cloth is wedged under the plate, extending forward over the coffee table.

The artist is known for his numerous still-life works. In his still lifes, the objects are always those of everyday life, jugs, plates, fruits, tablecloths, tables, etc. In different paintings, the arrangement and perspective of objects change. 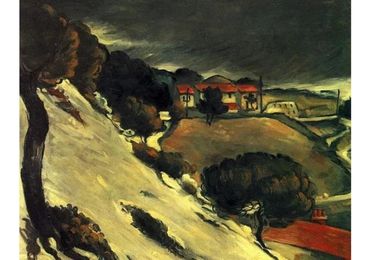 This work was created in 1871, during the Prussian War.

Shades of black permeate the landscape, and even the snow appears to set off the black. In stark contrast, with an overwhelming, almost monotonous fury, it captures the essence of the changing scene and also expresses a state of mind of pessimism and despair. 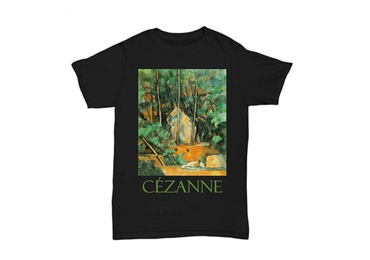 There are some subtle tones in the painting: the changeable whites of the snow and many greys, including the warm tones of Middle Earth between the red roofs. This is one of his most famous landscape paintings, a personal response to the Prussian War.

The taste for cold black, cold white, and gray is a reflection of the artist’s heart. It looks very natural, and there seems to be some helplessness mixed in. 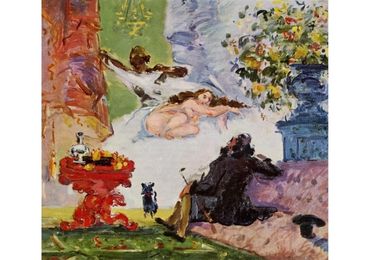 Once the work was exhibited, it received a lot of criticism at the time. 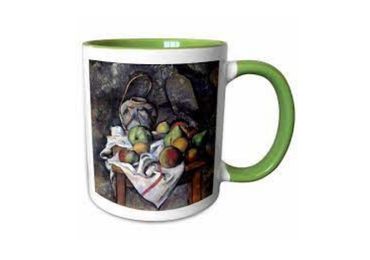 As a well-known Post-Impressionist painter, Paul Cézanne was known for his remarkable talent and talent during one of the late 19th century Impressionism and early 20th-century materialist art movements (i.e. Fauvism, Cubism, and Expressionism). Build a bridge.
Adhering to the innovative spirit of world-renowned artists, the TALMUD souvenir development team constantly explores the blue ocean market of customized souvenirs and gifts and creates value for customers with high-quality products and considerate services.