Katsushika Hokusai is one of the most famous and accomplished Japanese artists of all time.

He is best known for his woodblock prints and paintings, especially his series Thirty-Six Views of Mount Fuji. His works are extremely influential in Japan and the West.

If you want to learn more about Japanese art and related art custom souvenirs, be sure to check out our website! We have a wide variety of Katsushika Hokusai custom souvenirs.

Based on a detailed study of Katsushika Hokusai’s works of art, the TALMUD team lists 10 of the most famous works for your reference.

1, The Great Wave Off Kanagawa 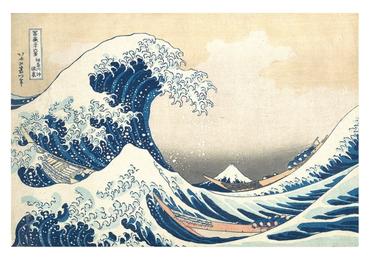 The Great Wave Off Kanagawa

“The Great Wave Off Kanagawa” is a woodblock print created by Japanese Ukiyo painter Katsushika Hokusai. It was published between 1831 and 1833. It is a famous painting of thirty-six Views of Mount Fuji series works.

With Mount Fuji as the background, this painting depicts the huge waves of “Kanagawa Oki” (ie, the sea outside Kanagawa, which is now on the surface of the Kanagawa District, Yokohama City) rolling over a fishing boat. The image of boatmen fighting hard for survival. It is Katsushika Hokusai’s masterpiece is also a world-famous work of Japanese art. 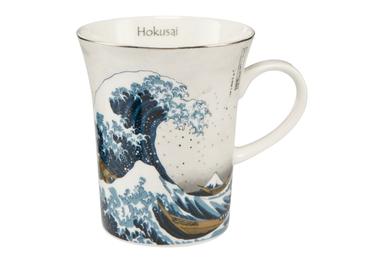 Thousands of copies of this work were printed at the time of publication, but it is estimated that there are only a few hundred of them in existence, some of which are collected in the British Museum, Metropolitan Museum of Art, Tokyo National Museum, and other large museums. 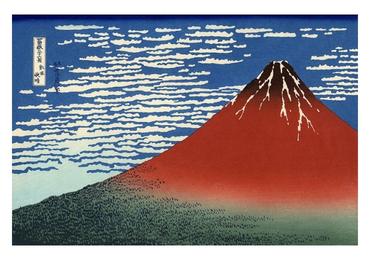 “Fine Wind, Clear Morning” is one of the “Thirty-Six Views of Mount Fuji” painted by Katsushika Hokusai.

The “Thirty-six Views of Mount Fuji” series is one of Hokusai’s benchmark works in the famous landscape genre. As a series that established the Ukiyo-e scenic spot genre, it has important historical significance.

This print from the series is known by its nickname “Red Fuji,” while the giant waves off Kanagawa, known as “The Great Wave,” are two particularly well-known works in the series. 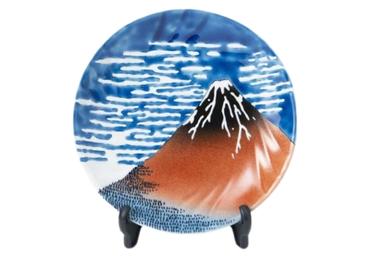 Compared with the complicated conception of the giant waves, the composition of this print is more clear. The series was produced in the middle of Hokusai’s life, at the peak of his career.

3, Dream of the Fisherman’s Wife 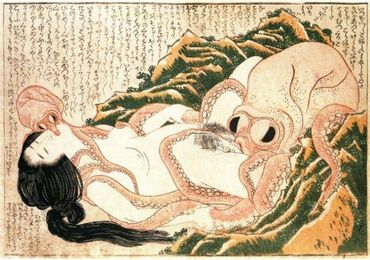 Dream of the Fisherman’s Wife 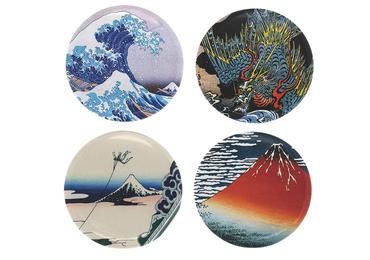 4, The Ghost of Oiwa from One Hundred Ghost Tales 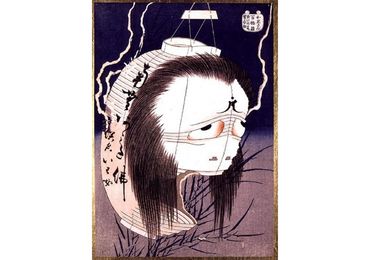 The Ghost of Oiwa from One Hundred Ghost Tales

The Ghost of Oiwa from One Hundred Ghost Tales is an 1831 lithograph by Hokusai depicting a famous Japanese ghost story in which a murdered woman is named after a ghost to avenge the murderer. 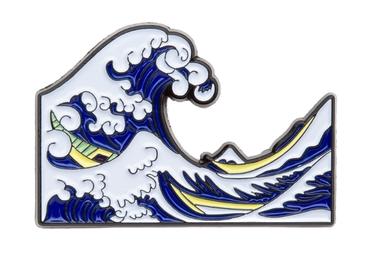 Hokusai’s work has many references to ghosts, and The Ghost of Oiwa from One Hundred Ghost Tales is one of the most famous Japanese artworks of all time. Oiwa’s characteristic drooping eyes and thinning hair are depicted, features often featured in theatrical productions. 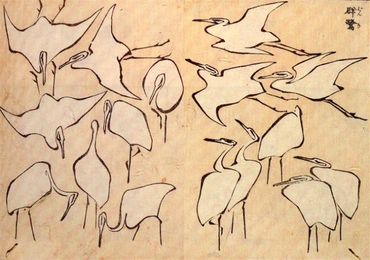 Cranes and turtles occupy an important position in Japan’s historical and cultural traditions. As a famous artist in Japanese history, Katsushika Hokusai’s works also have many themes of cranes.

This work is part of Hokusai’s “Quick Lesson in Simplified Drawing” series, where he effortlessly captures the graceful movements and gestures of cranes, depicting the relaxed world of birds. 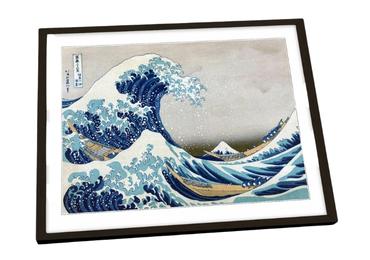 Cranes from Quick Lessons in Simplified Drawing is created in a style different from Hokusai’s earlier work, showing his artistic skill in exploring the relationship between bird pose and form. 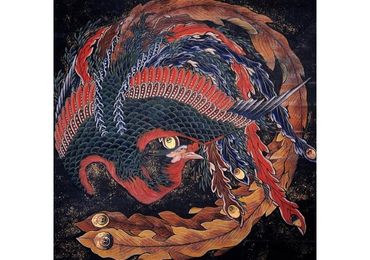 As a bird in Japanese mythology, the phoenix represents justice, obedience, fire, and loyalty, and is a symbol of peace in Japanese culture.

This artwork is very different from other artworks by Katsushika Hokusai, it is full of vibrant colors and the details stand out in an impressive way.

7, Whaling Off Goto, Oceans of Wisdom 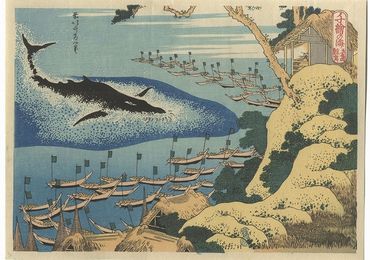 Whaling Off Goto, Oceans of Wisdom

Katsushika Hokusai created so many art series throughout his life, A Thousand Views of the Sea and Waterside is considered one of the greatest landscape series of the latter part of his career.

A classic artwork in the Wisdom Ocean series, Whaling Off Goto is a woodblock print showing a large whale surrounded by various whaling vessels. 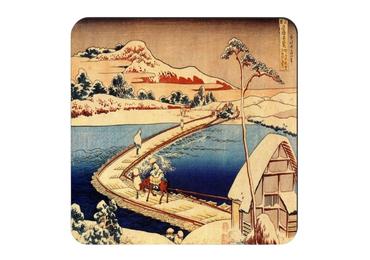 Focusing on marine fish and the flow of water, Hokusai’s paintings beautifully capture fascinating scenes along the seas, beaches, and rivers of Edo-era Japan.

There are few woodcuts in these series, and they create the ultimate impression in the eye of the viewer, with collectors appreciating these fine old reprints from Sea and Waterside.

8, The waterfall in Ono on the Kisokai-road, A Tour of the Waterfalls of the Provinces 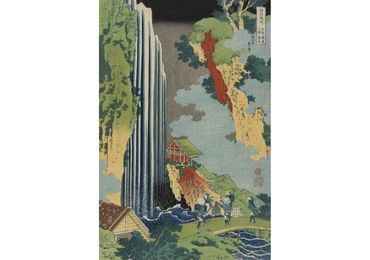 Japanese tradition holds that extraordinary natural phenomena are a sign of the presence of gods. Waterfalls are often one of the destinations for religious masters as they can purify themselves under the icy waterfalls.

As part of a series of waterfalls, Ono Falls on Kiso Kaido showcases the scenery and towering waterfalls and onlookers on the bridge, it is one of the famous spots on Kiso Street. 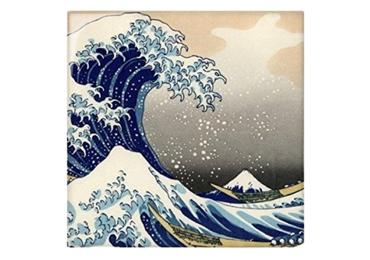 This print clearly describes the quality of Japanese woodblock prints that fascinated Western audiences in the 19th century. The work features patterned splashes and streaks of falling water, flanked by dense trees and buildings, exemplifying the Japanese aesthetics that inspired the Impressionist movement. 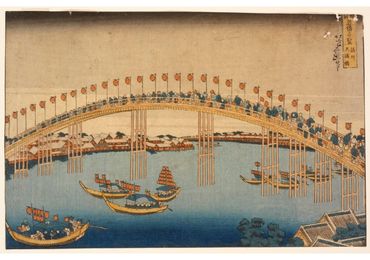 Tenma Bridge in Snow Country is a color woodblock print by Katsushika Hokusai. The work is a woodblock print created in coloured ink and depicts ships sailing along the river under the Tianma Bridge.

The series was created around 1831, at the peak of Katsushika Hokusai’s long career, just after the production of Thirty-Six Views of Mount Fuji. 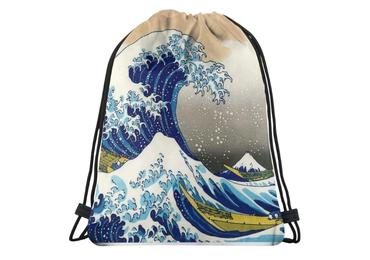 The blue in this work is the masterful application of the brocade painting technique by the artist. The technique involves creating a woodblock for each color used in a painting, making the creative process faster and more thorough than hand-painting by printmakers in the past. 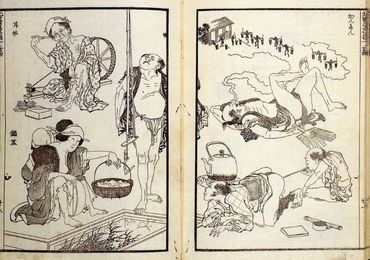 Hokusai Manga is a collection of sketches by the Japanese artist on a variety of subjects including landscapes, flora and fauna, everyday life, and the supernatural.

Hokusai began producing his sketchbook in 1811, and his 15 volumes of sketches, including manga and scenes of everyday life, influenced the development of Japanese cartoons or manga today. 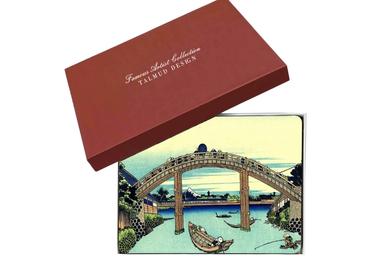 Under The Mannen Bridge At Fukagawa MDF Placemat

Printed in three colors (black, gray, and light flesh), 12 volumes of the manga were first published in 1814 when Katsushika Hokusai was 55 years old.

The final three volumes were published posthumously, two of which were assembled by their publishers from previously unpublished material. 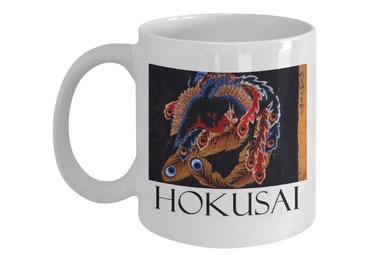 Katsushika Hokusai (1760 – 1849) was a great painter and printmaker. In his later years, he was commissioned to create decorative paintings for the interiors of several buildings, one of which was a mighty phoenix.

One of them depicts the phoenix in the Yuanzhengyuan of Obuse, Japan, which can be visited today. Another phoenix with similar detail by Hokusai is on display at the Museum of Fine Arts in Boston.

Katsushika Hokusai was a Japanese artist, ukiyo-e painter, and printmaker of the Edo period. He was influenced by such painters as Sesshu and other styles of Chinese painting.

Born in 1760 in Edo (now Tokyo), Hokusai worked as an apprentice for a wood carver when he was young. At age 12, his first published work appeared—a picture book containing poems written by his master’s daughter.

In 1804, at age 43, he published the first volume of “Thirty-six Views of Mount Fuji,” which included the famous Great Wave off Kanagawa. The series eventually comprised 10 volumes and depicted all kinds of scenes from one to 100 views of Mount Fuji. It made him internationally famous and inspired Western artists like Vincent van Gogh. 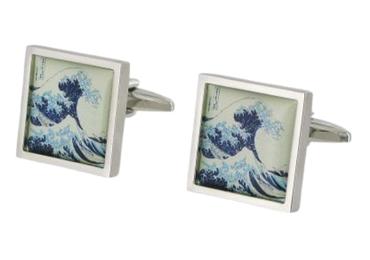 Explore more Katsushika Hokusai’s life through our website! We have many resources that will help you learn more about this incredible artist who changed art history forever with his unique style! You can even buy customized souvenir gifts from our factory, or other famous artists in the world.

It is hoped that the series of artist-made souvenirs developed by the TALMUD team can inspire artists and art lovers around the world as much as the Ukiyo-e woodblock print master’s “The Great Wave off Kanagawa”.