Claude Monet (1840-1926) was one of the famous French impressionist painters. He is a founding member of the movement because it is named after his famous work Impression Sunrise.

In Monet’s long career, he was the most consistent and prolific artist among the Impressionists. He painted about 2,000 works in his lifetime, mainly outdoor natural landscape paintings.

The TALMUD souvenir development team, after studying the impressionist and Monet’s works in detail, produced the following videos and produced a series of artistic souvenirs inspired by Monet’s famous paintings.

1, Lunch on The Grass 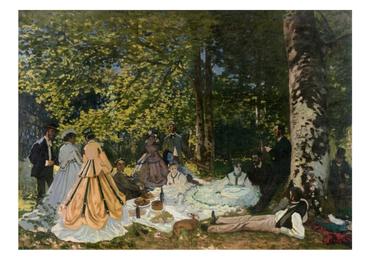 Lunch On The Grass

“Lunch on the Grass” is a painting painted by the painter Monet when he was 25 years old.

This painting was created when he was outdoors, it belongs to a representative work of Monet’s youth. 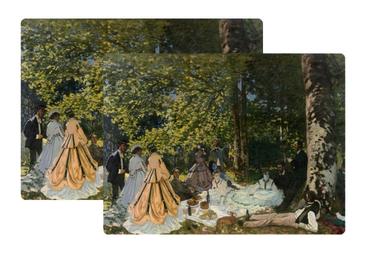 Lunch On The Grass PP Placemat

The painter used impressionist light and shadow techniques to draw gentlemen and ladies relaxing on the grass. The sceneries and characters in the painting are more attractive.

The painting “Sunrise Impression” is an oil painting created by the well-known French painter Claude Monet in 1872.

This painting depicts the sunrise port scene shrouded in the morning mist. The fascinating scenery is the most classic painting in all of Monet’s works.

This painting announced the birth of “The Birth of Impressionism” because the school was named after it. 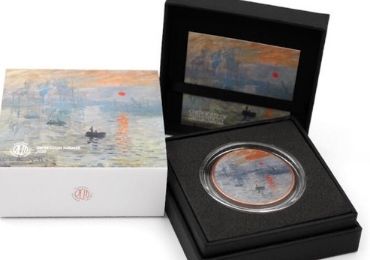 It is currently housed in the Mamunda Museum in Paris. 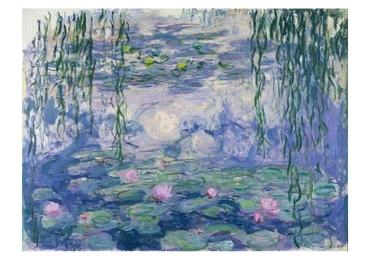 The painting “Water Lilies” is a classic painting and one of the ten famous paintings of Monet.

It is a famous painting created when the artist was 74 years old. This series belongs to the representative works of the masters of Monet’s evening art achievements. 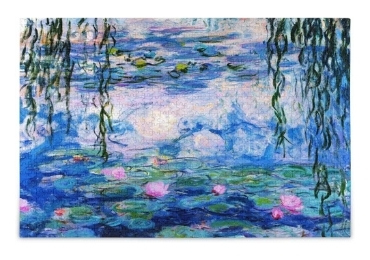 The artist depicts all the charms of water. The water lily in the water expresses the colors of nature, this painting paints a kind of inner beauty. It expresses the painter’s ideals and imagination. 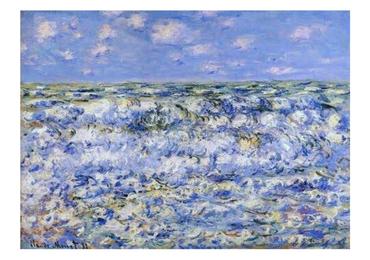 The painting “The Waves Breaking” looks so beautiful, showing the tumbling and transformation of the waves on the French coast, with strong colors and dynamics.

Monet’s seascape paintings in the 1860s were influenced by Japanese prints, and this painting was influenced by the Japanese Katsushika Hokusai’s “Kanagawa Giant Waves”. 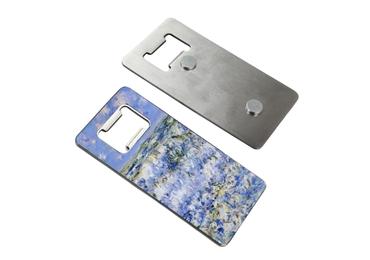 This painting is a very bold description of Monet, row after row of loosely curved brushstrokes, coated with thick paste-like paint, only one flatter brushstroke, giving a feeling of stretching the sea horizontally.

It is one of the top ten famous paintings of Monet, very precious. 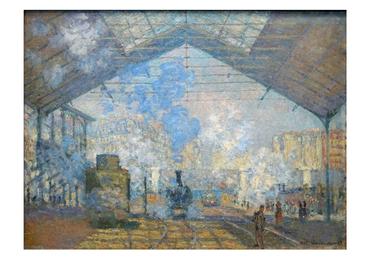 “St. Lazare Train Station” is a relatively beautiful oil painting painted by Monet at the end of the 19th century. 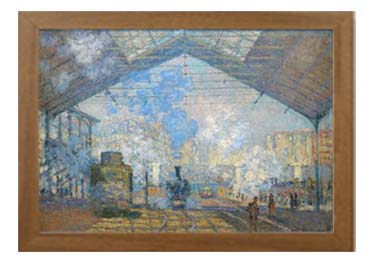 When Monet was not well-known, he used this train station to commute to Paris from Argenteuil, a rural province on the outskirts of Paris.

The artist created 12 works based on the theme of this station through realistic daily techniques. They all have the similar themes-the game of light, the smoke from the train shed, the billowing steam, and of course the locomotive. The painter tries to depict all aspects of the station.

6, The Grand Canal in Venice 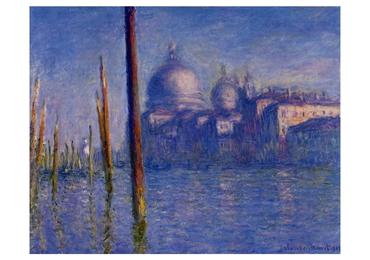 The Grand Canal in Venice

The painting “The Grand Canal in Venice” depicts the beautiful view of the canals in Venice at that time. The painting uses blue tones and is an impressionist painting. This oil painting was created in 1908 and is very precious.

The Grand Canal is an oil painting by French Impressionist painter Claude Monet. Sotheby’s called this painting “one of the most famous paintings in Venice.”

This Grand Canal series is again part of a larger series of Venetian paintings that Monet conducted during his only visit to Venice in 1908. 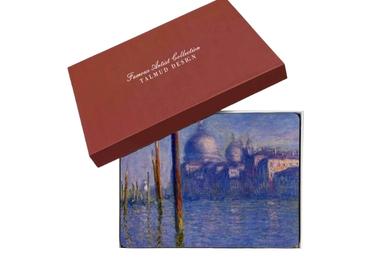 This painting is a classic view of the Grand Canal, trying to capture the changing face of Venice from the perspective of Palazzo Barbaro.

Art historians generally believe that this artist was at the peak of his art during this period.

7, The Poppy Flowers by Claude Monet 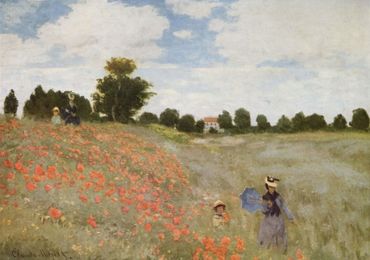 This painting was created when Monet was in Argenteuil, in the northwestern suburbs of Paris.

This painting is a good example of Monet’s control of the priorities in his paintings. He worked very hard to capture the light, color and changing sky, but he didn’t portray the faces of the characters.

But according to the judgment of art scholars, the figures in the painting are Monet’s wife and children. This should not be the artist’s carelessness. 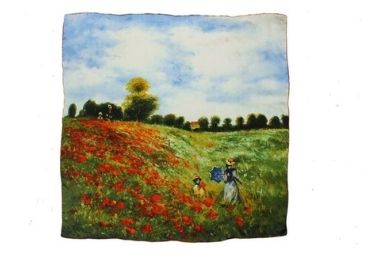 In fact, he is working hard to achieve a certain degree of fusion of landscape and figures in his paintings. Therefore, you can find the same color on their faces as some parts of the field.

Monet’s period in Argenteuil in 1872-1874 was a very important moment in the history of Impressionism. Monet often invited his friends Renoir, Sisley, and Manet to create and communicate with him.

8, Kamey Monet in a Japanese Kimono 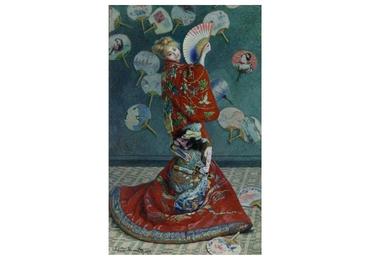 Madame Monet in a Japanese Kimono

Compared with other works, “Kamei Monet in Japanese Kimono” is a special painting with a unique style. It is one of his rare paintings with characters as the theme. It vividly depicts a girl in a red kimono. This painting draws the figures and the patterns on the clothes more meticulously.

This painting, also called La Japonaise for short, was created by Monet in 1876 when he was in his thirties.

The historical background of the creation of this painting: France is experiencing the charm of Japanese culture, and Monet responded by painting his wife Camille with a full set of Japanese costumes, which reflects the cultural exchange between Japan and France to a certain extent.

In order to highlight the European attributes of the characters in the painting, Monet drew Camille wearing a golden wig to emphasize that she is a European who has nothing to do with Japanese culture! 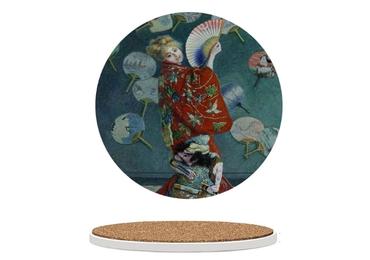 This painting of Madame Monet in a Japanese kimono is itself an extraordinary work of art by Monet. The artist showed the world how it can strike a perfect balance between complexity and relaxation.

The kimono is depicted in great detail, paying attention to details, and the intricate patterns of Japanese artwork immediately jump into the eyes of the audience.

But in terms of the facial expressions of the characters, this painting is presented with a loose and simple face, giving the impression of a beautiful woman.

9, Women in The Garden 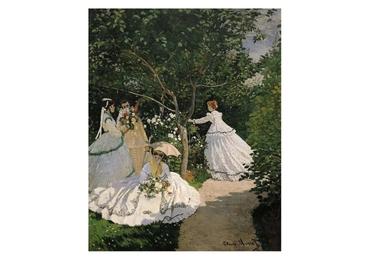 Women in the Garden

The oil painting “Women in the Garden” is a work created by the famous painter Monet at the end of the 19th century. The painting highlights four beautiful light-dressed women, which are particularly gorgeous and noble, using dark green and full of colors. Brilliance.

“The Woman in the Garden” created in 1886 is one of the early oil paintings of French artist Claude Monet when he was 26 years old. 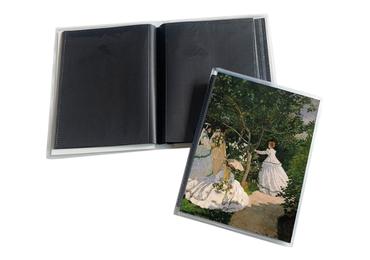 Women In The Garden Photo Album

The scene was taken from the garden of a property he rented. Monet completed the work indoors and used magazine illustrations to render fashionable clothes. The character in the painting is his companion and future wife Camille Doncieux.

10, Woman With a Parasol 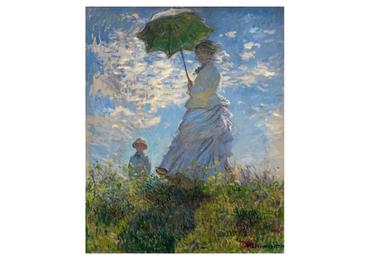 Woman with a Parasol

This painting is the closest to a snapshot of Monet’s work.

On this sunny day, Monet put his wife Camille in position, as if she suddenly turned to him. You can even feel the wind blowing in the countryside around Argenteuil.

This painting is unique among Monet’s works in that he attaches great importance to the description of the characters in the painting. 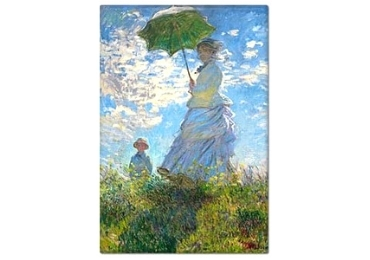 Woman with a Parasol Magnet

“Woman with a Parasol” depicts a beautiful woman holding an umbrella in her hand, and a little boy on the left. This painting uses green, blue, and brown as the main colors, and the colors are relatively fresh. It is an oil painting painted by Monet at the end of the 19th century.

11, The Palace of Westminster 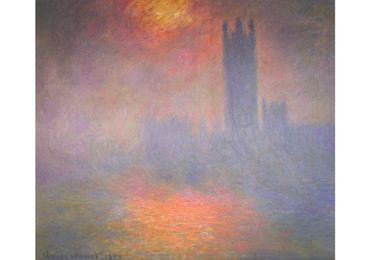 The Palace of Westminster

The Palace of Westminster is the meeting place of the House of Commons and the House of Lords. Its name comes from the neighboring Westminster Abbey, located on the north bank of the River Thames in Westminster, central London, England.

Monet has traveled to London many times during his long career. Between 1900 and 1904, he painted a series of 19 paintings of the Palace of Westminster, which successfully captured London’s famous unstable weather.

London is so special and its misty atmosphere. For those who love this kind of change and artistic conception, this city seems to be a paradise.
A small part of the smog in London is caused by nature, and most of it is caused by the smog brought by many industrial productions in the city.

In Monet’s paintings, the Palace of Westminster is like a mirage about to disappear with the fog. This scene also reflects his impressionist style. 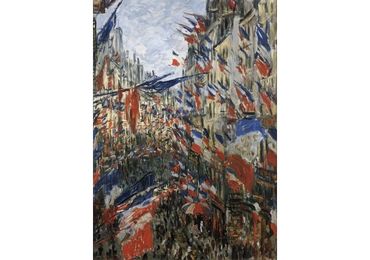 This work was created by Monet in 1878 and is based on a celebration of the Rue Montorgueil in Paris.

The story goes like this. During the 1878 World’s Fair, Monet was walking in Paris, looking for themes of his paintings. It was a sunny day when a party celebrating peace and labor was being held on the street.

The banners all over the street express patriotism, and Monet was infected by this atmosphere. It only took a few hours to complete the painting with his vivid brushstrokes.

American historian Philippe Nord wrote that it is fully in line with the “republican moment” that marked the emergence of a democratic society and its roots in contemporary France. 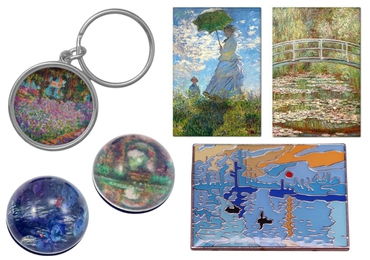 Whether you are a souvenir wholesaler or an online souvenir retailer, TALMUD can help you customize a variety of Monet’s art souvenirs.

We also produce customized souvenirs and gifts for some famous museums, galleries, artists, etc. The TALMUD development team has rich experience in the development of artistic souvenirs.

Welcome to visit our website, www.talmudcn.com, or send emails at sales@talmudcn.com.